As Pope denounces the fossil fuel-based world economy that exploits the poor and destroys the Earth, environmentally-progressive mayors call on their national leaders to step up at upcoming Paris summit. 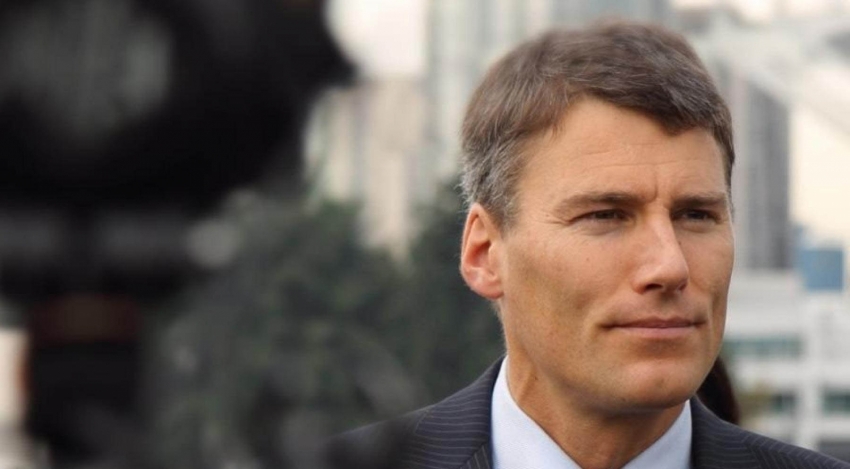 VISION MAYOR WITH A VISION: Robertson is joining other mayors in a big-picture look at environmental and social progress but will the prime minister heed the call?

Dozens of environmentally friendly mayors from around the world demanded Tuesday that their national leaders take bold steps at the Paris climate talks this year, saying that may be the last chance to keep the warming of the Earth at levels safe for humanity.

Some 60 mayors, including Vancouver's Gregor Robertson gathered at the Vatican for a two-day climate conference to keep the pressure on world leaders ahead of the Paris negotiations in December and to promote Pope Francis' environmental encyclical, which denounced the fossil fuel-based world economy that exploits the poor and destroys the Earth.

The mayors are expected to sign a declaration later Tuesday that states that "human-induced climate change is a scientific reality and its effective control is a moral imperative for humanity," according to the final declaration seen by The Associated Press.

In his remarks to the meeting, New York City Mayor Bill de Blasio announced new greenhouse gas emissions targets for the Big Apple and urged other cities to follow suit.

"The Paris summit is just months away," De Blasio said. "We need to see it as the finish line of a sprint, and take every local action we can in the coming months to maximize the chance that our national governments will act boldly."

California Gov. Jerry Brown drew rousing applause in a speech denouncing global warming deniers who he said are "bamboozling" the public and politicians with false information to persuade them that the world isn't getting warmer.

Brown, a former Jesuit seminarian, urged the mayors to not be complacent in opposing climate deniers. California has enacted the toughest greenhouse gas emissions standards in North America.

"We have a very powerful opposition that, at least in my country, spends billions on trying to keep from office people such as yourselves and elect troglodytes and other deniers of the obvious science," he said. 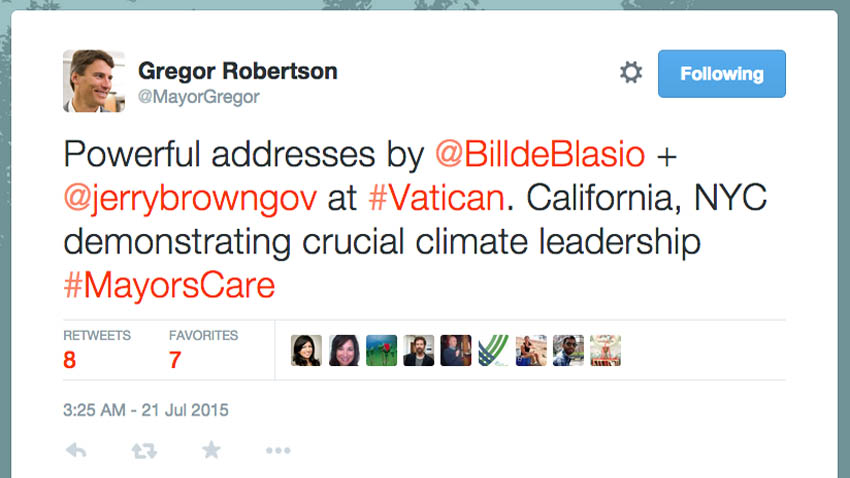 Robertson is the only Canadian mayor who is part of the gathering and has said he will be encouraging the Pope, in a session that is to take place Tuesday afternoon, to ramp up pressure on national governments across the globe to take action on climate change.

The afternoon audience with the Pope is being regarded as the climax of Tuesday's inaugural session. The religious leader has become a hero to the environmental movement and has used his moral authority and enormous popularity to focus world attention on climate change and its effects on the poor.

Francis' other main priority has been to raise awareness about human trafficking. The Vatican conference is aimed at showing how both are related: The exploitation of the Earth and its most vulnerable people, with global warming often responsible for creating "environmental refugees" forced to flee homes because of drought or other climate-induced natural disasters.

"Addressing both these phenomenon, climate change and modern slavery, is a herculean task for us as city administrators," said Tony Chammany, the mayor of Kochi, India.

The meeting's final declaration calls for financial incentives to transition from using fossil fuels to using low-carbon and renewable energies and to shift public financing away from the military to "urgent investments" in sustainable development, with wealthy countries helping poorer ones.

And it says political leaders have a "special responsibility" at the Paris talks to approve a "bold climate agreement that confines global warming to a limit safe for humanity, while protecting the poor and the vulnerable from ongoing climate change that gravely endangers their lives."

"Climate negotiators must dare to push boundaries and exclude fossil fuels as an option and reward solutions that are long-term sustainable and renewable," she said.

In addition to the climate declaration, mayors will be asked to sign a statement against human trafficking that was first penned by religious leaders at the Vatican last year.

OPINION: Why the Pope has caught this non Catholic's attention