Of piety and dubiety 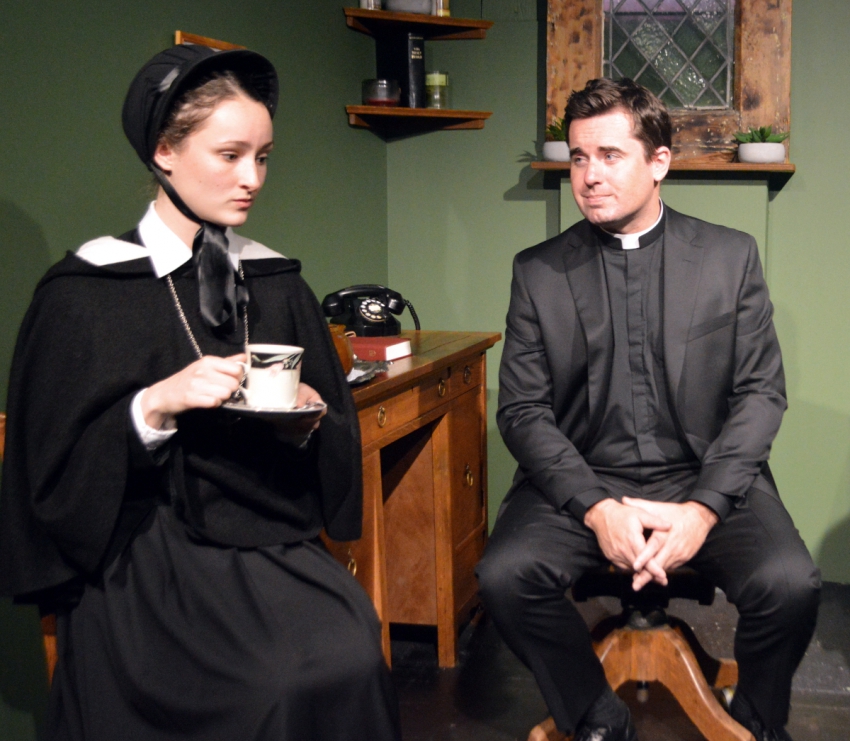 Skip dinner when you attend Seven Tyrants' production of Doubt. The
100-minute show starts at 7 p.m., a full hour ahead of most Vancouver
curtain times.

That's so as to get you in and out of the company's cramped, 20-seat,
third-floor walk-up venue atop the iconic Penthouse strip club before
the mainstage "exotics" start their bumps and grinds downstairs. A
gamut of pole dancers would hardly comport with the churchy tenor of
John Patrick Shanley's two-act morality play set in the 1960's milieu
of a U.S. inner-city Catholic Middle School.

The show's early start puts you back out on Seymour Street by 9
o'clock, in plenty of time for after-theatre supper. And, rest
assured, this paradoxical script will leave you with plenty of grist
for table talk.

An unsettling claustrophobia grips you as soon as you enter the room,
even before any actors appear. Far from embracing the Seven Tyrants'
norm of spare décor, set designers Lynda and Gary Chu have crammed the
space with all the stolid paraphernalia of a parochial academy and its
attendant church: stained glass windows, a carved pulpit, a garden
grotto enshrining a Madonna icon, an imposing principal's desk
complete with oaken swivel chair and anodized rubber dial-up
telephone.

So jam-packed is the scene that director Bill Devine has to block much
of the action in the narrow, relatively unobstructed band right at the
edge of the micro-stage. The three protagonists – flinty old Sister
Aloysius (Tallulah Winkelman), dewy young Sister James (Olivia Lang)
and groovy Father Flynn (David Thomas Newham) – sidle along with an
audible swish of clerical habits, practically rubbing knees with
front-row attendees.

But their outward show of sacerdotal gravity belies the seething
conflicts that rive Saint Nicholas parish and the broader society.
It's the Sixties, after all (as sound designer Daniel Deorksen keeps
reminding us with a montage of iconic period pop tunes and monastic
plainsong) – the heyday of civil rights struggles, Flower Power and
Vatican II church reforms.

Father Flynn flourishes in the fresh breeze that's blowing in from
Rome. From the pulpit he eloquently indicts bigotry and lauds the
human fellowship of Doubt as a needed spur to Faith. He befriends his
young charges, coaching boys' basketball and specially taking under
his wing the beleaguered first black student in the newly-integrated
school.

Sister Aloysius, the school's principal, knows better. She's honed her
tart realism and steely generalship over decades of experience as a
teaching nun and even a pre-convent stint of married life before she
was widowed in "the Hitler war."

Amidst a world of menacing uncertainty, the church has served her as a
safe haven of discipline, doctrine and routine. And those are the
blessings she's determined to confer upon her students. She's not out
for their love; rather, above all, just to keep them in line – a
project unconscionably undercut by Flynn and his fripperies.

So she orders her neophyte underling, Sister James, to squelch her
progressive education whimsies and curb her especial enthusiasm for
any particular subject or student. And when the young nun reluctantly
reports a private "counseling session" between the new black student
and the priest, Sister Aloysius immediately assumes the worst and
launches a scorched earth campaign to oust Flynn from the parish.

Step one is to summon the boy's mother (Liza Huget) for a conference
and spell out her suspicions. Shockingly, the mother is unfazed. She's
just grateful that her son has an adult protector, whatever the
underpinning of the relationship. But the opening gambit draws a
furious Flynn into the principal's office.

How dare she cast such groundless aspersions? What's more, church
hierarchy would dictate that she submit any such concerns to her (all
male) superiors. Hierarchy be damned, she retorts. She's worked her
nuns' network at his previous parishes to probe why he's cycled
through so many postings.

This turns out to be pure bluff, a sting. But it's enough to deflate
the priest into seeking yet another transfer. So Saint Nicholas' Flynn
"problem" has been "solved" or, more accurately, merely displaced to
somewhere else. And, meanwhile, the school's first black student is
left bereft and unprotected.

Even Sister Aloysius dissolves in tears at the ambivalence of this
equivocal outcome. It's left to her underling, Sister James, to
console her as they both enter into the liberating fellowship of
Doubt, as per Flynn's opening sermon.

The much-revived play has been a repertory theatre staple ever since
its 2004 U.S. premiere. The 2008 movie version, with Meryl Streep and
Philip Seymour Hoffman, looks definitive on YouTube.

But not for me. Brilliant as it is, all the film's fancy framing,
camera angles and establishing shots only serve to blunt the force of
Shanley's avowed "parable." The moral stakes feel so much higher with
live actors who have real-time skin – not mere celluloid – in the
game.

All the more so in the resonant confines of Seven Tyrants'
nano-blackbox. There, up close and personal, Winkelman's obsession
takes on a commanding force and Newham's empathic humanity shines
through its shroud of guilt. Lang's innocent altruism turns her into a
battleground between these two dueling charismas. And Huget projects a
world-weary tenacity beyond the reach of any cloister.

Director Devine has melded the four co-stars so that each performance,
riveting in its own right, impeccably supports the others. Don't miss
Doubt. It runs through December 14th.