Fräulein Maria is a rollicking ride 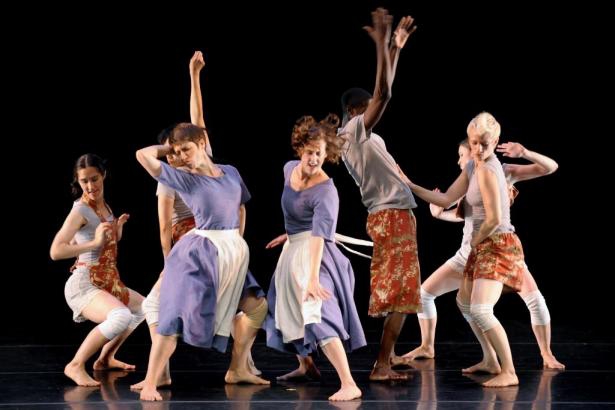 Rarely do I find myself chuckling at a contemporary dance performance. Fräulein Maria makes me not only chuckle, but downright laugh out loud. Billed as both a parody and celebration of 1965’s The Sound of Music, this popular New York dance company deconstructs the iconic film with heaps of sass and good humour.

The emcee warmed us up with a little singing at the top of the show. “Doe a deer, a female deer….” It’s fun—personally I can’t remember the last time I sang at a dance show. Then the curtains opened, and we were off on a rollicking ride of high camp and vibrant dance.

Elkins brought many genres of dance to the table—contemporary dance, tap dance, street dance, hip hop, capoeira and ballroom all make an appearance. Because the fun factor is at the forefront, this mad fricassee of genres worked and even seemed cohesive. The connecting tissue was an urban street vibe that ran continuously throughout. Nuns worked it out in black hoodies and capris instead of habits and robes, the Von Trapp children undulated their spines and pumped their pelvises like nobody’s business. “Do-Re-Me” was a full-on production number, with incredibly physical dancing and an awesome climax. Occasionally I wished the calibre of dancing was more even; some dancers were excellent, and others seemed to struggle. But when the show as a whole is so entertaining and enjoyable, you ease up on things like dance technique and allow yourself to fall headlong into the experience of the performance.

Fräulein Maria bends gender roles to great effect. Three dancers channelled Julie Andrews, and all three Marias, including one gentleman who looked adorable in his dress and apron, were all standout performers. Executing dynamic floorwork, equal opportunity partnering and complicated standing allegro, the Marias danced up a storm with loads of charisma. I must also mention the tall, red-headed fellow who shined as Liesl, the oldest Von Trapp daughter, all decked out in his pretty pink dress. Not only was he one of the most accomplished dancers on the stage, his flirty and dirty performance of “Sixteen Going on Seventeen” was terrifically outrageous.

Doug Elkins himself made two appearances, the first of which was in a vaudeville-style park bench scene for “Edelweiss.” Performed with the emcee, the two men spent the entire song vying for a fedora. The choreography was clever, charming and provocative, especially when Elkins successfully tossed the fedora to rest atop the emcee’s Nazi salute, reducing it to a hat rack. But it was Elkins’ second appearance that stole the show. In a pool of light with the Marias at his feet, Elkins was Mother Abbess for “Climb Ev’ry Mountain.” Showcasing his break dance roots, this solo was phenomenal. In a black hoodie habit, running shoes and enormous b-boy shorts, the solo was packed with fast, street-style isolations, and movement that were altogether different from anything we’d seen up until now. Sung by the powerful female voice of a past generation and danced by a break dancer, the juxtaposition of song and dance is incredibly effective. One of the best moments of the night, the crowd went wild for it.

The piece wrapped up in 70 minutes with a lovely ballroom-inspired number. The Marias danced romantically with their partners and finally, under a centre spotlight, Captain Von Trapp and his Maria embraced (with Maria lifting him up by his posterior, of course) and the piece ended sweetly, with a kiss.

Judging by the response during the curtain call, one thing was clear. Audiences love to be entertained. And beyond being entertained, if they can find the joy and the laughter in a performance, that’s some serious icing on the cake.