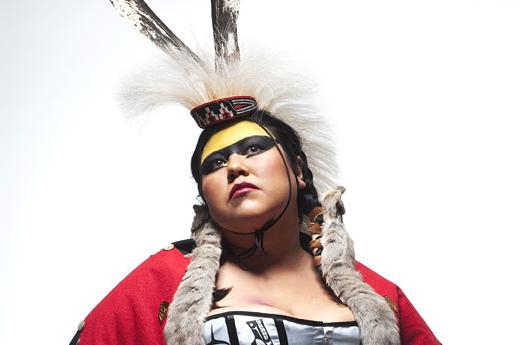 As you emerge into the Vancouver Art Gallery's Beat Nation exhibit, it's the thumping hip hop rhythm and looped singing that strikes you first.

Then it floods in: everywhere you turn, you're surrounded by aboriginal art that's at once challenging, playful, disturbing and distinctly hopeful. You won't find it in a tourist souvenir shop downtown or the anthropology museum. Beat Nation is alive.

Hosted at the gallery until June 3, the exhibit's curators dreamt that it would reflect “a generation of artists who juxtapose urban youth culture with Aboriginal identity in entirely innovative and unexpected ways,” according to the show's website.

As you explore Beat Nation's multiple rooms on the building's second floor, that innovation and element of surprise becomes engrossing and spectacular – and literally turns the tables on Canada's historic injustices.

In Mi'kmaq artist Jordan Bennett's work, “Turning Tables,” a DJ turntable spins as traditional drummers and singers play – but the spinning record, needle and base are entirely carved from oak, spruce and walnut. Even the sound slider works, though the music itself is pre-recorded. 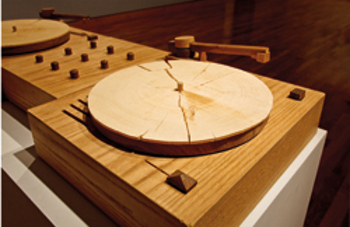 Around the corner, you enter a dark theatre screening films by aboriginal artists. One of those, by Kanien’kehaka (Mohawk) artist Jackson 2Bears, uses jagged mash-up techniques overlaid with pixillated images of elders to re-tell and re-shape Canada's colonial history. Images of masked, armed Mohawk warriors of the Oka Crisis blend with Prime Minister Stephen Harper and Opposition leader Jack Layton's apology for Indian Residential Schools. All of it stitched together with 2Bears' mesmerizing electronic soundtrack.

Much of the work is explicitly political, hitting hard at the shadow-side of this country's history. Others play with concepts and categories, infusing a subversive edge, which provokes new ideas and conversations about aboriginal survival and rights.

Merging the fur-and-felt materials of traditional regalia with goth punk fashion styles, Tsimshian, Gitskan and Cree Nations performance artist Skeena Reece makes a bold statement about indigenous resistance to colonization with her work, “Regalia for Raven: On the Colonial Fleet.” 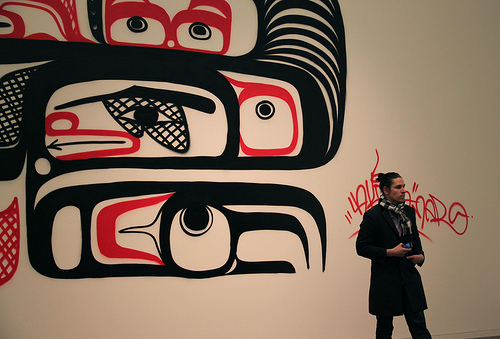 The regalia's red-and-black ceremonial cloak is embroidered, as is typical, with buttons – but in the shape of a silvery hand grenade. And the work is fronted by a Thunderbird distributing AK-47 guns to Native warriors. Reece plays havoc with notions of terrorism, violence and the defence of rights and land in the last setting you'd might expect it – inside Vancouver's respected art gallery, housed in the former city court house.

“It is not my intention to win over audiences,” Reece wrote in a catalogue for Biennale, according to the exhibit's press kit, “but to watch them slowly realize that I am indeed fucking with them.”

Beat Nation does exactly that, it's true, but re-mixes political urgency with a sense of humour. One artist, Dane-zaa Nation artist Brian Jungen, refashions Nike Air Jordans into ceremonial masks. “Prototypes for New Understanding” is footwear like you've never seen before – Jungen adds hair, noses and eyes to his re-assembled sneakers to express a creative criticism of, the sports industry and its appropriation of aboriginal names – The Chiefs, Indians, Redskins and Braves. 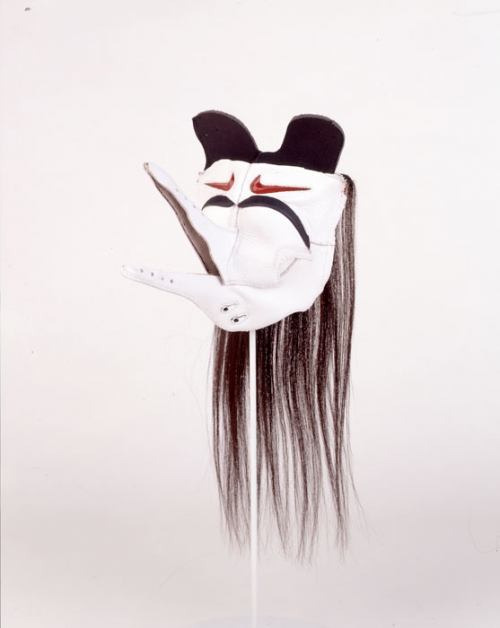 Local and international hip hop artists are showcased in another section, where their music videos are looped and lyrics proclaim to passersby that today's indigenous youth are taking hold of the medium and expressing their resistance to injustice and hope for the future.

A wall-sized photograph of Kwakwaka'wakw artist Marianne Nicolson's “Cliff Painting” depicts an 11-metre high red pictograph she painted on a rock face near the entrance of her Dzawada'enuxw tribe's village.

Fellow Kwakwaka’wakw sculptor, Sonny Assu, created 136 music records from copper – one for each year since the passage of Canada's Indian Act, which in 1867 created a separate citizenship class for aboriginal peoples, forcing them onto tightly controlled reservations. For Assu, because copper is so valuable to his nation, a successful music album would never go 'gold' or 'platinum' – but copper.

Originating in an online hip hop project, Beat Nation has morphed and evolved over several years, always with a beat-driven pulse and implicitly subversive message. Co-curated by Kathleen Ritter, the gallery's associate curator, and Secwepemc artist Tania Willard, the exhibit continues at the Vancouver Art Gallery until June 3.

FUSE at the Vancouver Art Gallery