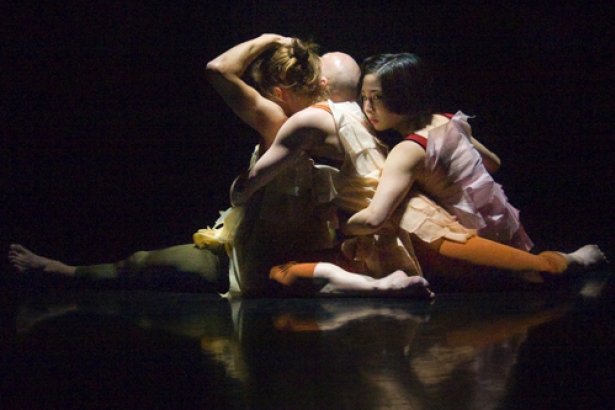 Peggy Baker, an acclaimed internationally celebrated, dancer, choreographer and teacher, returns to the Firehall Arts Centre after a twelve year hiatus with two unforgettable companion pieces. Inspired by the mysterious, interconnected world of insects.  coalesce & armour – an audio action tour runs from Jan 8 – 11 and should not be missed by dance enthusiasts.

Not only do we get to experience her trio coalesce performed to an electro-acoustic score by Debashis Sinha but you get to see her dance in a duet armour  pairing Baker with Bessie Award winning dancer Larry Hahn.

Both pieces are inspired by Lewis Thomas’ classic series of scientific essays on communication amongst social insects entitled The Lives of a Cell:: Notes of a Biology Watcher (1974). A collection of 29 essays written for th New England Journal of Medicine  between 1971 and 1973, Thomas touches on subjects as various as biology, anthropology, medicine, music (especially Bach), etymology,mass communication and computers.One can imagine the  underlying theme of the interconnected nature of the Earth and all living things would lend itself to dance well.

coalesce is a complex and unpredictable inquiry into the nature of communication that muses on alternate sensory and movement pathways for eliciting interconnected action. It is danced by three Peggy Baker Dance Projects performers: Sean Ling, Sahara Morimoto and Andrea Nann. Varone’s armour, pairs Peggy Baker in a spare duet that entangles the couple in a primal act of connection.

A series of films by Montreal artist Sylvia Safdie featuring beetles and ants were also a catalyst for the creation of coalesce for Baker, who became fascinated by the elegant, otherworldly connectivity and communication between the creatures.

In the first ‘audio action’ portion of the show, Baker speaks directly with the audience, sharing the inspiration, methods and materials of the choreography, and the dancers demonstrate aspects of it to reveal stages of exploration, development and refinement.

Born in Edmonton, Baker moved to Toronto in 1971 to study at The School of Toronto Dance Theatre, a school based in Martha Graham technique, and appeared with them as an apprentice. One of the founders of Dancemakers (1974), and except for a break to study in New York in 1976-77, she remained until 1980 as artistic director. Dancing as a lead dancer with the Lar Lubovitch Dance Company in New York (1981-88), she then assisted Lubovitch as rehearsal director. In 1990 Baker toured across the United States with Mikhail Baryshnikov's White Oak Dance Project and launched a new career as a solo dancer/choreographer. In her solo programs,  Baker mixes her own choreography with work by such choreographers as Jame Kudelka,  Paul-André Fortier, Mark Morris and Molissa Fenley.

“…a meticulous sense of shape and pattern…where a single shift in movement leads to new pathways.”  - Paula Citron, The Globe and Mail

“Varone’s choreography is minimalist and suspended in time, like a slice from a longer continuum. Baker and Hahn are here more like archetypes, elemental and distilled representations of the human need for connection.”  -Michael Crabb, The Toronto Star

"an intimate, human portrait. Remaining on the floor the dancers cycled through interlocking embraces. Their bodies fit like an endlessly mutable jigsaw puzzle: a universe of two." - New York Times