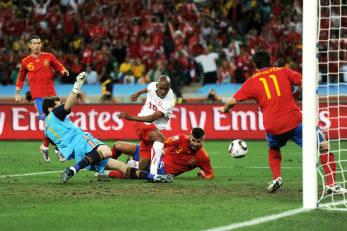 Switzerland 1-0 Spain. The biggest shock of the tournament so far when Switzerland defeated Spain 1-0. Spain dominated the play. The Swiss coached by former Bayern Munich Coach Oliver Hitzfeld, soaked up the pressure and then scored the game's single goal on a break by when Gelson Fernandes followed up on Eren Derdiyok's surging run. Spanish goalkeeper Iker Cassilas will feel he could have done better on the initial shot.

While one would still expect Spain to qualify, first place in the group is definitely up for grabs and a Spanish failure to qualify is within the realm of possibility, in the (still unlikely) event that Chile were to take another point from Spain.

Uruguay had a dominating performance against South Africa. Diego Forlan was the star of the game and South Africa were unable to recover from his early goal. South Africa's fate was sealed by a penalty and the (harsh) sending off of their goalkeeper late in the second half. Replays later showed that on the play leading to the penalty the Urugayan player was offside. Given their poor goal difference South Africa's only slim hope of qualifying is to defeat France in their next game and hope for draws in the games between France and Mexico and Mexico and Uruguay.

In the early game Chile completely domninated Honduras, but for all their dominance they could only manage a single goal, (and that one a little lucky) a fact which must concern them going forward.

Player of the Day

Goal of the day

DS: Gelson FERNANDES goal for Switzerland against Spain. Perhaps the 2nd ugliest goal of the tournament, but the most significant so far.