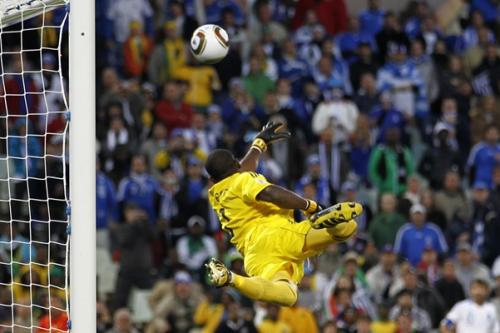 Despite Vincent Enyeama's acrobatic saves Nigeria could not get a result against Greece.

The first game between Argentina and South Korea was a bit of a disappointment as Argentina disposed of the Korean's rather easily. The Argentinian's kicked the scoring off with a good free kick that hit a South Korean defender Chu Young Park and deflected into the Korean net. Argentina scored again in the 33rd minute with a well deserved goal that was finished off by Gonzalo Higuain. Argentina was cruising into half time until Demichelis of Argentina gave the ball away and Chung Yong Lee made Argentina pay for their carelessness in front of their own net. This goal gave Argentina fans a scare as South Korea came out firing in the Second half and almost tied it early on. But Higuain made the game a formality on a goal where he was clearly offside, but the linesman didn't catch him so he put in the rebound of Lionel Messi's strike off the post. Higuain added another goal to his tally in the 80th minute. This was statement from the Argentinian's that they aren't a team to be messed with.

Nigeria and Greece were next. The Super Eagles got off to a flying start when Kalu Uche's freekick went straight in in the 16th minute. But a moment of madness from Nigeria's Sani Kaita in the 33rd minute when he kicked Greek Tosoridis. Only Kaita could've known what he was doing as he was rightfully sent off. Greece were quick to take advantage of the man advantage with Coach Otto Renhagel sending attacker Gergios Samaras for a defender. Greece were given a gift of a goal when Dimitris Salpingidis's shot was deflected past a helpless Victor Enyeama. The Greeks carried the game in the second half but were constantly being denied by Goalkeeper Enyeama especially when Greek Forward Samaras had a header destined for the top corner that was tipped away incredibly by Enyeama. But disaster struck in the 71st when a wicked shot from outside left Enyeama with no chance at holding the ball and Tosoridis put away the rebound. Enyeama was distraught he could barely bring himself to stand and after the game was seen being comforted by teammates in tears. Great result for Greece horrible for Nigeria especially with the good start they had, and the heroics of Enyeama.

The Final game between Mexico and France was very entertaining for neutrals. The first half was a sign of things to come as the Mexicans were creating the majority of the chances and France was contributing nothing to the game offensively. The Mexicans were clearly the better team and were only helped when they brought on Javier Hernandez or "Chicharito" as he is known in Mexico. He quickly made a difference beating the French offside trap and rounding French goalie Hugo Lloris and calmly slotting the ball in the back of the net. The second goal came quickly after Hernadez's opener when Pablo Barrera was judged to be brought down by French defender Eric Abidal in France's penalty box. Cuathemoc Blanco stepped up and slotted the ball in the corner of the net giving Mexico a 2-0 lead and a cruical 3 points for "El Tri". It was a pathetic performance from France though and it was not helped by the coaching of Raymond Domenech who seemed determined to not let Thierry Henry on the field to try and give a spark for the offensively challenged French.

Player of the Day:

Goal of the day: