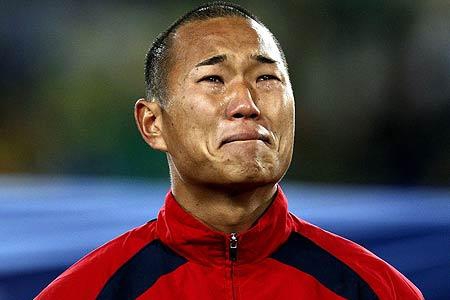 One of the most touching moments of this year's World Cup was when Jong Tae-Se cried during the national anthem of North Korea. Tae-Se and North Korea will be looking to upset European giant Portugal tomorrow.

North Korea surprised the world when they made Brazil battle for a tough 2-1 win. The way the North Koreans played against Brazil was tough defensively. If North Korea wants to get a good result against Portugal it will have to play the same way. North Korea won over the hearts of many neutral fans with its game against Brazil, especially Jong Tae-Se who was overcome with emotion when the national anthem of North Korea was played.

Tae-Se will be key to North Korea's hopes of winning against Portugal as he proved against Brazil that he can make the best defenders in the world look like amateur.

Portugal's task has been made a bit tougher since its midfielder Deco is out with injury. If Portugal is to win Cristiano Ronaldo will have to feature more in this game or it may struggle finding some goal scoring.

Chile comes into its next game in an unexpected situation. Everbody was expecting Switzerland to enter the game against Chile with 0 points. But due to a huge upset this game is now a possible battle for first place in Group H.

Chile would love to have star striker Humberto Suazo back for this game as Switzerland's defense looked almost impossible to break down in its game against Spain. It will be a very hard task for Chile to win unless it is able to create more chances than it was able to in its first game against Honduras.

Spain thought that it would just be able to step on the field and automatically win. During the game against Switzerland, Spain played as eleven separate players and not as one team. If Spain plays the same way against Honduras it will be in for another shock as Honduras is in a must-win situation and won't bow down to anyone.

Honduras had a disappointing performance against Chile. It had nothing going forward in attack. If Honduras is to get a result Wilson Palacios will have to step up big and stop the Spanish attacks or this game could get ugly very quickly.