Sausage and bacon-making in the Downtown Eastside 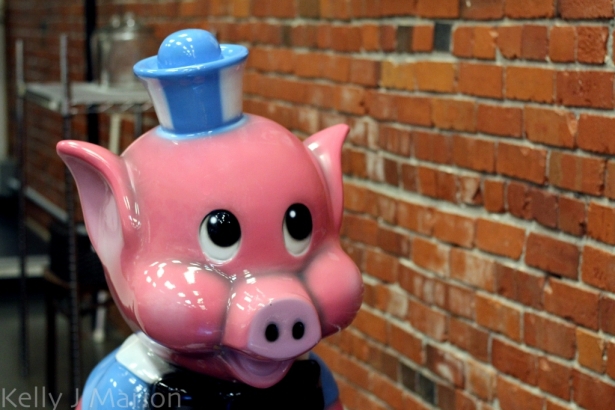 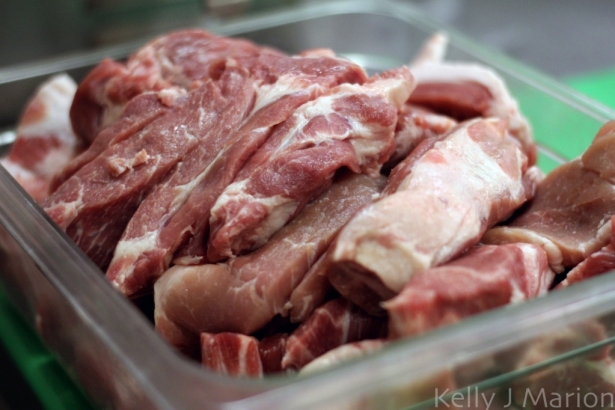 Photos by Kelly Jean Marion --> follow her at @kellyjean247

Meat grinding with the push of a button. Unlabeled spices on the counter and animal intestines in a bucket. Sounds like an ordinary Friday night, right?

It was what I found myself doing last Friday night, at Save On Meats' newly launched series of cooking classes that includes poultry butchery, canning and preserving, advanced sausage and charcuterie making, and sausage and bacon 101. 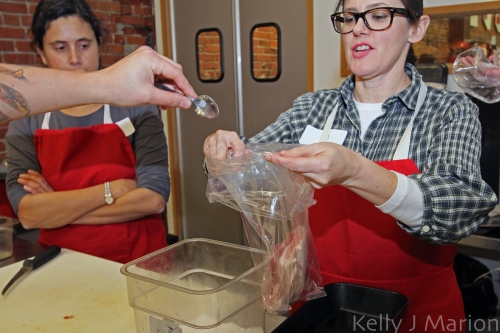 A group of media representatives from a variety of outlets gathered together for some comfort food at the Save On Meats diner, and then got messy in the butcher shop with the sausage and bacon 101 class.

For dinner, I had the Smoked Turkey Pot Pie with a side salad and shared a hand-spun Rich Irish boozy milkshake (Jamesons, Bailey's and chocolate ice cream). 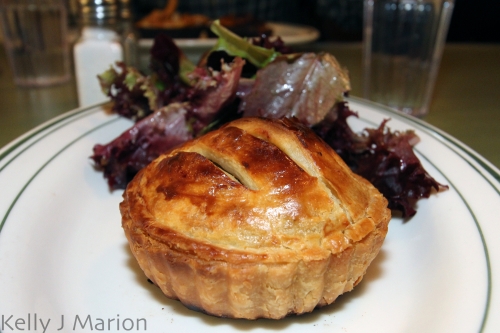 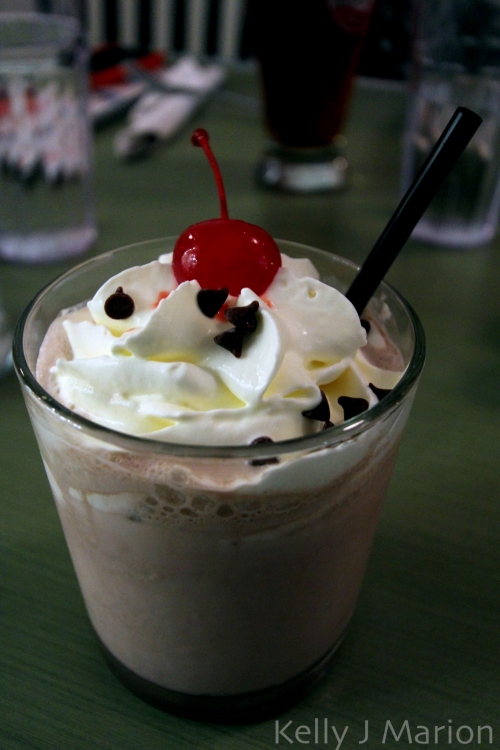 After we were satiated it was time to work.

The first task was to make bacon, which proved to be easier than most of us originally thought.

"This is the most important piece of equipment you'll need," Elliot said as he showed us a plastic bag. "It's just like shake and bake." 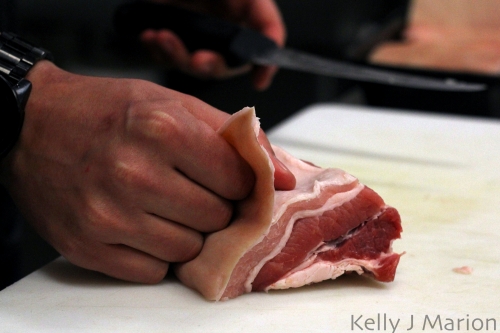 I'm still waiting for mine to finish so that I can slice it up and invite some people over to chow down on bacon and eggs. My overzealous nature makes it hard to wait, though. 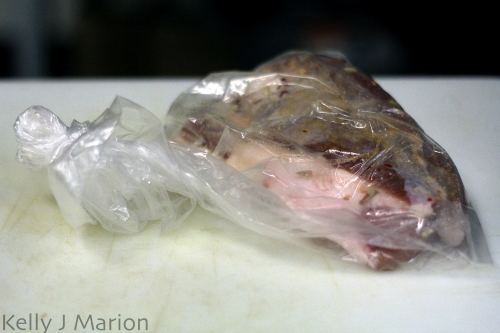 "Why do they make really big knives? It's not just to make me feel like more of a man," Elliot told us as he showed off the different knives we could use for cutting our meat.

"If you look at a knife underneath a microscope, it actually looks exactly like a saw. So if you've every tried to saw through a log you know that long drawn strokes will always make your life easier with any knife work."

Elliot also explained to the group how and when to sharpen the knives. 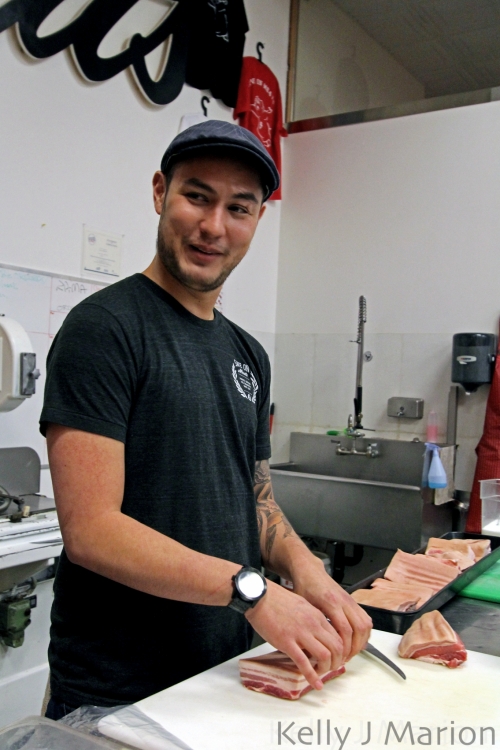 The second task of the night was to make our own sausages.

We stuck to an all-pork sausage and focused on technique and experimentation with flavours. While a meat grinder is what we used at the shop, when at home Elliot suggested a KitchenAid Mixer for the job.

Some of the participants were naturals, instinctively adding spice, filling the casing with sausage evenly, and creating links in their long tube of ground meat with finesse. 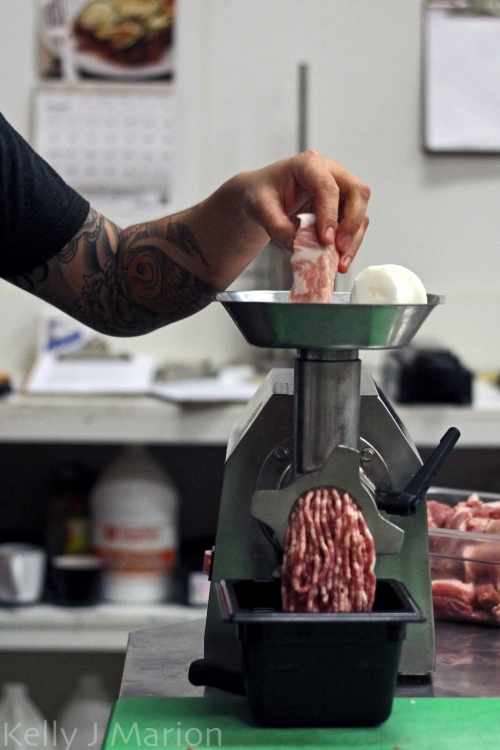 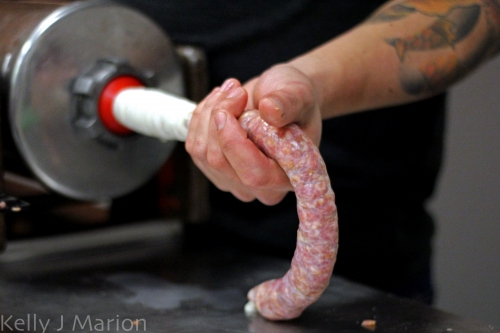 Elliot led the class in a casual way, tolerating and even contributing to our dirty meat jokes as the class progressed. The relaxed, anti "lecture and learn" setting was a great way to put people at ease and ultimately made it a better experience for everyone.

Classes start at $75 and can be booked at www.saveonmeats.ca/classes. Participants get to experience a three-hour program that promises some tasty treats to take home. 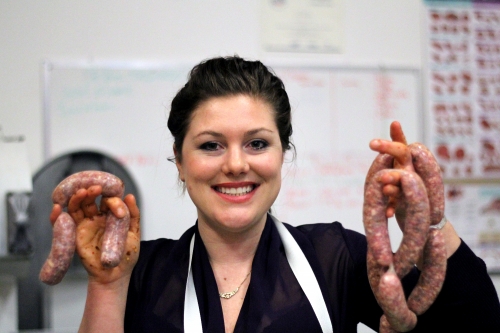 For more photos from my meat adventure check out my set on Flickr.

About Save On Meats

For those unfamiliar with Save On Meats, the butcher shop-cum-diner is an institution in this city and has been a Vancouver landmark since it opened in 1957.

It operated from 1957 to 2009  as a fully-functioning retail, butcher shop and grocery store. Unique to the area, it was the go-to place for fresh, fairly-priced meat. As the neighbourhood changed and developed it continued to be the place where locals could get affordable food, contrasting the not-so-affordable options in the surrounding area. As new businesses came and went, Save On Meats prevailed and became an important piece of the community.

In 2009 the previous owner decided to close shop, leaving the place empty for two years which had a lingering affect on the locals. Mark Brand resurrected the business in June of 2011 with a vision to restore the building back to its prime for the local East Vancouver community and Vancouver residents.

Today, Save on Meats houses a butcher shop, sandwich counter, diner and much more. Working with local partners, Save on Meats is a leader in the charge to make the social business model independently sustainable.