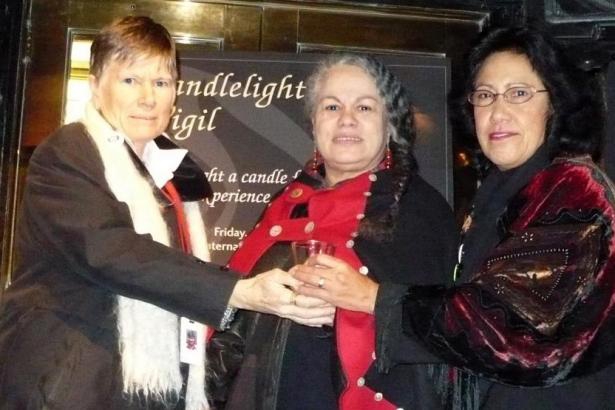 A group of about thirty people came out to the City of Vancouver's first candlelight vigil on violence against women last night, held to coincide with International Human Rights day and the end of 16 Days of Activism on Gender Violence.

Miriam Palacios, representing We Can BC and the City's Women's Advisory Committee, emceed the event outside City Hall. She noted parallel vigils taking place in Victoria, Surrey, and Prince George.

Councillor Ellen Woodsworth spoke first, noting that although increasing rates of reported sexual assaults and the continuing violence against Aboriginal women present challenges to Vancouver, the City has been proactive in setting up a Women's Advisory Committee and working with police to address violence against women.

Dalannah Gail Bowen and Bernie Williams, organizers of the Women's Memorial March and Walk4Justice spoke passionately about the need to end violence against Aboriginal women and delivered a blessing for peace.

"Just because it's the end of the 16 days doesn't mean we can just sit back and go on with our lives. We have a responsibility in our communities. These are our daughters and our sisters, our nieces and granddaughters," Williams stated.

Williams wasn't the only speaker who encouraged participants not to see the end of the 16 Days campaign as an excuse to stop activism against gender violence. The keynote address and reading of the City's proclamation recogniing the 16 Days of Activism was delivered by Mayor Gregor Robertson.

"I can't imagine how difficult it is for many of you to grapple with this," said Robertson, "We're going to change those attitudes, the attitudes that enable violence against women to persist. It means working together in more collaborative ways."

"We see instances of violence on the streets of Vancouver and just this week we were on the streets at Main and Hastings with the Vancouver Police Department announcing the ongoing, but much better named, Sister Watch," Robertson continued.

But Robertson was quick to point out that the City needs to take steps to tackle the underlying problems that cause gender violence: "At City Hall here we're focused on the longer term solutions: ending homelessness...making sure there's housing, making sure there's treatment for drug addiction."

After the proclamation, BCTF President Susan Lambert wrapped up the speeches with a short statement, including the story of how she got active on the issue of violence against women and worked to establish the first transition house in Prince Rupert after hearing about a student's aunt who had been brutally beaten.

So can we expect another vigil next December? Palacios was optimistic: "I look forward to the day where every town and city in this province and around the world will have candlelight vigils on this day...so that the lights from these vigils will be visible to all British Columbians."