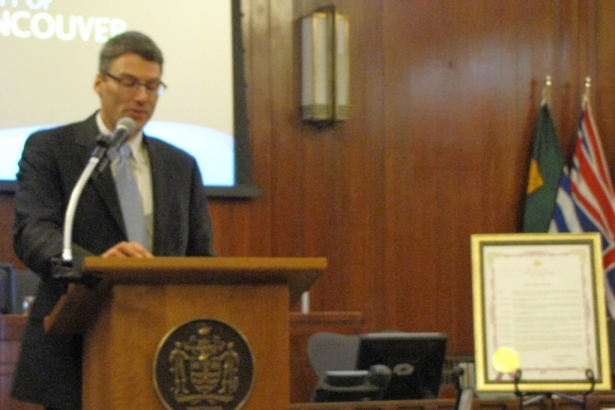 The regular Vancouver city council meeting of February 26, 2013 came to order at 9:35am.

There were four items adopted on consent, all of them administrative reports. The first was “Business License/Chauffeur's Permit Hearing Panels – May to December 2013.” The report was a schedule of hearings to be held from May to December, though there are no hearings scheduled in December. Staff also assigned three councillors and an alternate (in case someone is sick) to each meeting.

The next item was “Local Improvement Flat Rates – 2012.” Some “local improvements” were completed in 2012 and this report requested that council approve the flat rates that will be charged to property owners on their next property tax statement. The overall flat rate will be divided among property owners based on foot frontage, but the good news is that the overall rate was lower than originally expected.

The last item was “2013 Heather Marina Moorage Rates and Other Fees.” This report seeks council’s approval to increase the moorage rates at Heather Marina, so that they remain reflective of the market, and to request an enhancement condition assessment for the marina.

Councillor Adriane Carr requested that the two other administrative reports on the agenda be held for debate.

After McKearney finished his presentation, councillors were given the opportunity to ask him questions.

Councillor Kerry Jang clarified that the new plan would mean that residents could use fireworks in designated parks or other spaces, but not on public property.

Councillor Carr asked if other communities use this model and staff told her that they were proposing something unique. She also asked if sales would be restricted to those with an approved fireworks plan. Staff said yes, but that they were still working out all the details.

Councillor Raymond Louie thanked staff for the report and said he was pleased that it both expanded the use of fireworks and accounted for safety concerns.

Councillor Reimer asked if there was a time limit for setting off fireworks. McKearney said time limits had not yet been considered and that staff would have to consult city noise by-laws while finalizing the plan.

Councillor George Affleck said he was pleasantly surprised by the report, as the original motion asked staff to “report back to City Council with recommendations for additional but limited periods of consumer fireworks sales and discharge similar to the current allowance in place for Halloween.” Affleck said that the current recommendations didn’t seem similar to current policy at all and wanted to know what had happened since the original motion was made in July.

McKearny and City Manager Penny Ballem responded to Affleck by saying that they had tried to honour the original intent of the motion, but had also tried to improve safety.