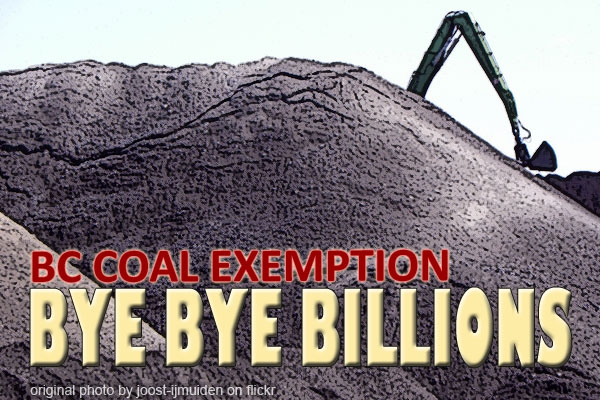 Westshore Terminals, “the busiest single export coal terminal in all of North America” hides in plain sight right next to the Tsawwassen ferry terminal. Last year most of British Columbia’s 25 million tonnes of coal got shipped from the terminal. An average day sees over 700 train cars packed with coal arrive. The terminal can load four tonnes of coal per second into the biggest coal ships on the planet. Despite “easily surpassing the combined coal shipments of all other terminals in Canada,” it is planning to increase its capacity to 33 million tonnes by next year.

Most British Columbians support our B.C. Carbon Tax as an important tool to help reduce the dangerous emissions of CO2 into our climate system. What many don’t know, however, is that almost all BC coal is exempt from our carbon tax.

We aren’t talking about a tiny exemption here.

We are talking about a lot of coal.

It is a story of a multi-billion dollar loophole larger than the carbon tax paid by all B.C. residents and businesses. It involves skyrocketing global commodity prices, the biggest climate polluting nation on earth, $1,500 a year per B.C. family, and the largest coal port in North America hiding right here in greenest Vancouver.

Our government charges its own residents and businesses a carbon pollution fee -- the B.C. Carbon Tax -- of $36 to $42 per tonne whenever they buy B.C. coal.

This is the B.C. Carbon Tax table for coal. If you buy B.C. coal to use in B.C., you pay this carbon pollution fee.

...AND FOR GOOD REASONS

The B.C. Carbon Tax is a widely praised policy tool and the reasoning for levying it -- to help B.C. develop a low-carbon economy and reduce our dangerous pollution levels -- is economically sound.

Coal is a primary driver of climate destabilization which is already incurring costs on society. Scientists have warned for years that the amount of coal we are burning is dangerous and will lead to increasing extreme weather damages, ever rising seas, crippling ocean acidification, crop losses, regional conflicts and tipping points in the climate where humans lose control of the rate or magnitude of climate destabilization. The costs are adding up.

“Coal is the single greatest threat to civilization and all life on our planet. Our global climate is nearing tipping points. Changes are beginning to appear, and there is a potential for explosive changes with effects that would be irreversible — if we do not rapidly slow fossil fuel emissions over the next few decades.”

-- The Sword of Damocles by NASA climate scientist James Hansen

In fact, many groups locally and globally feel coal pollution is such a significant threat to our climate stability that they are working hard to shut down coal completely.

Nobel Peace Prize winner Al Gore said: “I can’t understand why there aren't rings of young people blocking bulldozers and preventing them from constructing coal-fired power plants.” Well, they are starting to.

Economists are united in the simple fact that if, at the very least, you don’t put a price on the carbon pollution from coal then the marketplace has no way to reduce the amount that is released.