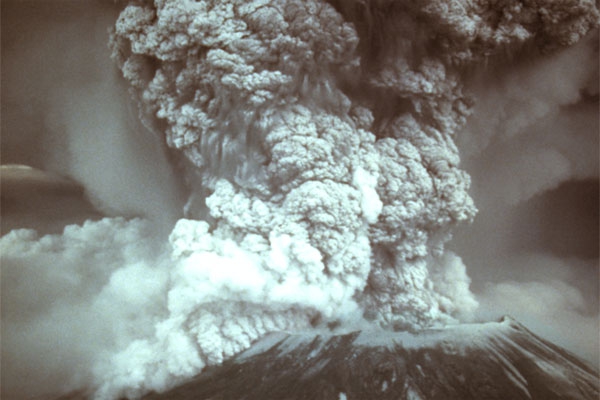 Thirty one years ago the Cascade stratovolcano Mount St. Helens cataclysmically exploded. The top 1,300 feet of the mountain disappeared to be replaced by a mile wide crater. It was the “deadliest and most economically destructive volcanic event in the history of the United States”.  It also spewed ten billion kilograms of the climate warming gas CO2.

Looking at the incredibly dramatic photos of volcanoes, it easy to imagine how they could alter the weather and the climate system. And they do. Volcanoes have been one of the primary drivers of extreme weather events and even climate changes over the eons of earth’s history.

But as big and powerful as they are, when it comes to spewing CO2 and changing the climate, volcanoes are no match for humans burning fossil fuels.

In fact for volcanoes to match our fossil fuel CO2 emissions, a Mount St. Helens eruption would have to happen every two and a half hours. Who would want to live in a climate cooked by volcanic activity on that scale?

This, and many more amazing comparisons, are in a great new Discovery News article about a recent study by United States Geological Survey volcanologist Terrence Gerlach.

Maybe adding climate destabilizing pollution equal to our planet’s volcanoes exploding a hundred times more often than they do now might not be the best legacy for our children to inherit. We could always switch to cleaner energy sources instead.