If Oprah Winfrey is willing to plug "Ethical Oil", why stop with the tar sands? 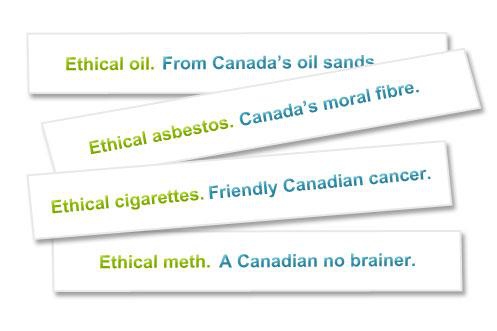 Canada is trying to hit one out of the ballpark with a brazen attempt to re-brand some of the world’s dirtiest and most dangerous oil as “ethical”. They've even got Oprah Winfrey's Network to feature their ads.   If we pull it off, there's no reason to stop there. If  an “ethical” brand make-over can make our tar sands smell sweet, just imagine how many other profitable, but deadly, industries it can pry open for us.

Talk about an image problem!

The Alberta tar sands are widely feared. Hundreds of people have been arrested in both the USA and Canada protesting the expansion of our tar sands. Europe and California are working to ban them. Climate activists have called the climate pollution from our tar sands the biggest “carbon bomb” on the continent.

The top climate scientist in the US, James Hansen of NASA, says that exploiting them means “game over” for our climate and that any government that allows infrastructure to be built to expand tar sands pollution “either they don't ‘get it’ or they simply do not care about the future of young people.”

The Dalai Lama and Archbishop Tutu along with seven other Nobel Peace Prize winners recently called on our Prime Minister “to use your power to halt the expansion of the tar sands. Further exploitation of the tar sands will … make turning the clock back on climate change impossible.” They specifically said that curbing climate pollution is a “profoundly moral decision, one that deserves to be placed alongside any other major struggle in human history.”

The US Environmental Protection Agency says that turning “Alberta asphalt” into oil dumps 80% more climate destabilizing gases into our already whacked out weather system than developing other available oil sources would. The exploding scale of the tar sands is single-handedly preventing Canada from controlling our climate destabilizing pollution, despite Prime Minister Stephen Harper promising the world that we would. And we haven’t even gotten to the part about ripping up the boreal forests, or duck-killing, toxic lakes, or cancer clusters, or oil fouled rivers.

Here is where the miracle of marketing comes in.

Sure you are stuck with a product that by all accounts is more polluting and destructive than the exact same product from your competition. And sure your customers are starting to feel that all the extra damage caused by your product makes it a less ethical choice for them. Don't worry. Marketing magic says you just pretend your weakness is really your greatest strength. Voila: “ethical oil”. Wasn’t that slick?

You might have noticed that the “ethical” in “ethical oil” doesn’t actually refer to the oil. Nope. That battle is lost. The “ethical” instead refers to the general behaviour of the people that happen to live in the same nation as the multi-nationals’ carbon mines.

If you're having trouble marketing a dirtier and more dangerous product, just change the subject and market something completely different: like Canadian goodness.

Now the correct statement would be something like “unethical oil from a nation that also does some ethical things”. But seriously, we are talking marketing here, not boy scouts. To paraphrase that great green marketer, the Wizard of Oz: “pay no attention to that nasty product behind the curtain.”

Now if Big Oil and our Harper government can pull off this audacious “ethical” branding trick, why on earth would we stop at “oil”? There are a myriad of unethical products that we could re-habilitate and profit from just by masking their foul smell with the new pine-scented “ethical Canada” brand. If there are jobs on the line, we almost have to do it. Here are a few to consider:

I know what you're thinking: not even marketing can make a known carcinogenic product, like asbestos that you refuse to even put warning labels on, into an “ethical” product. Yes, yes, Canadians wouldn’t be caught alive using our own fibrous, cancer-causing, asbestos. We export it all.

And, yes, again, Canada spends millions of dollars a year to very carefully -- while wearing hazmat suits -- remove any asbestos we find in our own buildings. Seriously, who wants asbestos in their home? And sure Canada was the only nation willing to block an international treaty requiring warning labels on asbestos.

But all that negativity about our asbestos will melt away when our “ethical asbestos” brand hits the airwaves. You see, we have lots of Canadians who have nothing to do with our nasty asbestos products. Many play hockey. Even more vote. So we have plenty of warm fuzzy “ethical” out there in our big nation to strip mine and sell off.

Let’s take a look at our closest competitor in the offloading asbestos game: Kazakhstan. It just sounds “unethical”. But don’t just take our marketing panel’s word for it. Newsweek picks Canada as seventh “best” country and Kazakhstan as…wait for it…61st. Nuf said.