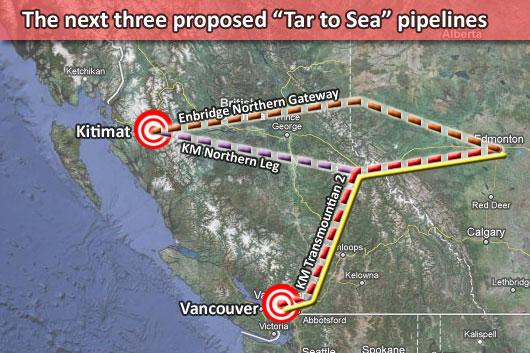 This is the second part of a two part series. The first part explored the dramatic decline in American oil imports and why they won’t absorb much more of the tar sands expanding flows. Today’s second part explains just what that means for Vancouver and BC as a proposed string of gigantic tar sands pipelines target our coast.

Let’s be clear about one thing: Big Tar is planning to build lots of new pipelines. Keystone XL was just one of many. The tar sands industry says they plan to increase their production by 4.5 million barrels per day in the next 25 years. Here is how many pipes they will need to move that extra oil:

However you slice it, Big Tar has very aggressive plans that require slapping down a big new tar sands pipeline project every two to four years for decades.

All the routes they are now talking about run right over us in BC. And if we act right now, they will throw in, every day, a supertanker carrying four times more oil than spilled from the Exxon Valdez, to plough the twisting, vulnerable waterways of Vancouver harbour, through the Great Bear Rainforest and past Haida Gwaii. What’s not to like?

For the very first round Big Tar have their sights on a new tar sands pipeline into Vancouver plus two more tar pipes across BC and dumping out at Kitimat. Just like in the USA, many locals are pretty darn unhappy when they learn they are going to be stuck with the pipes, leaks, supertankers, spills and billions of tonnes of climate destabilizing pollution while the oil and profits go elsewhere.

Let’s take a closer look at Big Tar's plan to use our BC wilderness and coastline as the jumping off point for the largest carbon bomb in the hemisphere.

Say hello to lots of supertankers

So far, the only existing tar sands pipeline that makes it to saltwater is the Kinder Morgan Transmountain pipeline that ends right here in Burnaby. In 2005, one oil tanker filled up there every two and a half weeks. By last year oil tanker traffic in and out of Vancouver harbour increased to one every five days.

As the Tyee reports, Kinder Morgan now have plans to increase tar sands crude up to six times into the Burnaby tanker port. Part of this entails adding new pipeline capacity (TMX2 + TMX3) to their existing pipeline route. If so, oil traffic in Vancouver harbour will approach one supertanker per day by 2016.

If you aren’t keen on the supertanker tango starting up in your “Super, Natural” British Columbia you can join over 65,000 others in signing the NoTankers.ca petition.

For those worried about oil spills, you might want to know that these tar sands pipeline are guaranteed to spill every drop. Whatever crude isn’t accidentally spilled across our beaches, wetlands and Fraser delta will definitely be intentionally spilled into our atmosphere when burned. Either way we lose big. Some of that tar sands climate pollution spill will overheat our climate, flood nations, damage crops, kill forests, melt permafrost and fuel super storms. And some will acidify our struggling oceans even further.

Oh, and by the way, those climate damages come with a thousand year money-loss guarantee. That is how long climate pollution takes to disappear.

BC: the new climate villains?

Let’s start with the smallest of the BC tar sands pipelines...