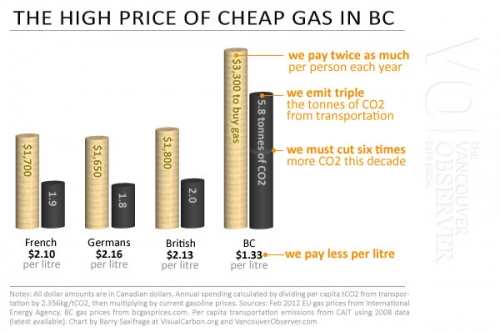 A rapid spike in gas prices is hot news right now. And for good reason: when gasoline prices spike they drain the wallets of almost everyone but the oil companies. A recent Globe and Mail headline spelled it out: “What $1.70 gasoline would mean: Job losses, stock rally fizzle.”

As my chart above shows, many Europeans like the British, French and Germans charge themselves 80 cents more per litre than we do. And while it can seem counter-intuitive, charging themselves consistently higher pump prices has brought large benefits to economies like Britain, France and Germany. Compared to us in BC:

A primary policy tool they use to create these long-term economic benefits has been to keep their gas prices much higher than we have in BC. As a result they use gasoline much more efficiently. That is basic economics. They have found ways to squeeze a lot more money and mobility out of each litre. Their economies use a third as much gasoline to produce roughly the same amount of wealth per person as Canada’s does.

Conversely, in Canada and BC our choice so far has been to keep our gas prices consistently lower than the British, French and Germans. We value gasoline less and have less economic motivation to use it efficiently. As a result we use about three times more per person to generate a similar amount of GDP. Our need to use three times more  gasoline to run our economy and our transportation makes us far more vulnerable to price spikes and to increasingly unavoidable CO2 restrictions.

When the price of a litre of gas quickly spikes, we in BC are stuck buying three times more litres per person. Triple damages. Ouch. Many experts predict that peak oil constraints will make these price spikes a regular feature of the global oil market. Ouch, ouch, ouch.

Today in BC, having to buy three times more gas overwhelms the supposed benefits of our cheaper pump prices. By focusing on winning the battle for low pump prices we seem to be losing the war of the wallets. Indeed, our total gasoline bill is an extra $1,500 per person in BC compared to the British. We have been penny wise, pound foolish.

So the next time you hear a Brit complain about paying over two bucks for a litre of gas (more than $8 per US gallon) you can cheer them up by telling them how much money they save overall compared to us in British Columbia.

In researching all this I kept thinking how nice it would be if we in BC had all those economic and low-carbon benefits that the British, French and Germans already have. And that got me wondering what it would look like if we decided to close the gas price gap with them over the next ten years. In particular I wanted to understand what role our BC Carbon Tax plays in all of this.

What I found out changed the way I think about our Carbon Tax. My next article will bring you all the details.