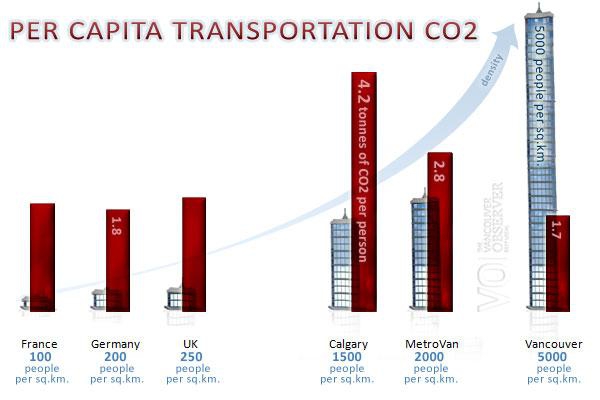 One common excuse I hear for why the transportation in BC and Canada is so much dirtier than in Europe is that Canada is a much bigger and more spread out. It is certainly true that denser populations usually use less gasoline per person.

But the reason for the huge gulf in gasoline burning between Europe and Canada is more complicated than just the relative size of our countries and populations would suggest. For one, Canada is actually a very urban nation. Second, Europeans pay 80 cents more per litre for gasoline, and lastly, Europeans drive much more efficient vehicles.

The result of lower gas prices and less efficient vehicles is that even within our densest and greenest cities, like Vancouver, we struggle to get down to the national averages for European nations like France, Germany and UK.

I was surprised when I first read the stats on just how urban a nation Canada really is. A third of us live in just three cities: Toronto, Montreal and Vancouver. Half live in our dozen largest urban areas. Close to two thirds live in what Statistics Canada calls “large urban areas.” Eighty percent of us live in urban areas and ninety percent live within 100 miles of the USA border. 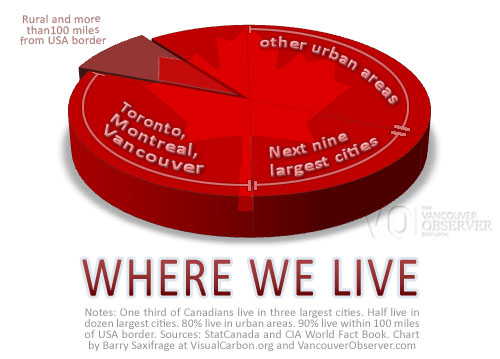 From the limited data I could find, it does seem that our cities -- on average -- are less dense and more sprawling than European cities. And as my top chart shows (view larger version), Canadian cities with higher density can burn much less gasoline per person. Just compare Vancouver to the larger Metro Vancouver region to see this effect. So, clearly, increasing urban density will be a vital tool in reducing transportation impacts in Canada.

But this overall trend of declining-gasoline-use-with-increasing-population-density is super-imposed on top of a Canadian transportation sector that is much less efficient than the Europeans.

A fundamental difference is that the British, French and Germans add 80 cents more in taxes – per litre -- to their gasoline than we do. As my previous article showed, these 80 cents equals $330 in additional carbon taxes. Naturally, they use much less gasoline. And of course adding $330 in carbon taxes reduces the amount of carbon they emit. That is all basic Economics 101.

One effect of consistently higher gasoline prices in Europe can be seen in the following chart, which shows the average efficiency on new vehicles sold in various nations. 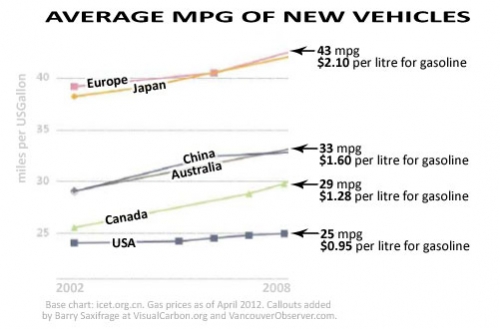 The average European vehicle goes 13 more miles from each US gallon worth of gasoline. That was true in 2002. It was still true in 2008.

The European economy receives a bonus of 13 extra, cost-free, CO2-free miles from every gallon of gasoline they buy compared to our Canadian economy. Each year, we drive our vehicles more than 300 billion kilometres in Canada. Every one of those hundreds of billions of kilometres is significantly more carbon polluting on average than in Europe. Or in Australia. Or in Japan. Or even in China.

This chart is a textbook illustration of the power of carbon pricing. The higher the cost of the carbon fuel, the more efficiently the nation uses it in their transportation.