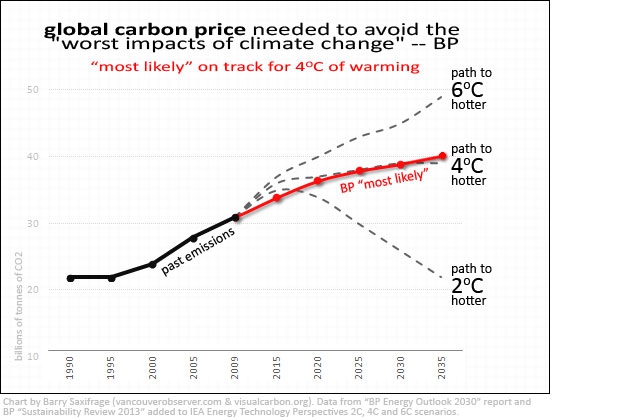 Last year BP projected global climate pollution would "most likely" surge 26% by 2030. As I reported at the time, this would crank up the Earth's thermostat a disastrous +4C according to the International Energy Agency (IEA). That is twice the +2C threshold for "dangerous climate change" that all major nations have promised to stay below.

This week BP delivered even worse news in their Sustainability Review 2013 report. If the world's nations continue muddling along with their slow and incremental changes to climate policies then the most likely result will be:

Such clear evidence that the world is racing headlong into a serious climate crisis has apparently rattled even a super-major fossil fuel corporation like BP. In their new sustainability report they call for "global action" to set "effective" climate policies that include an economy-wide "carbon price":

"The scale of this challenge is such that governments must act by setting a clear, stable and effective carbon policy framework …"

"We also believe that putting a price on carbon – one that treats all carbon equally, whether it comes out of a smokestack or a car exhaust – will make energy efficiency and conservation more attractive to businesses and individuals, and lower-carbon energy sources more cost competitive. A global carbon price should be the long-term goal, but regional and national approaches are a good first step, provided temporary financial relief is given to sectors that are exposed to international competition. "

Elsewhere in the report they point out that renewable energy will need a long-term carbon price to be competitive.

Here in BC we have an economy-wide price on carbon. And recent studies show that our version of it -- an income tax cut funded by a carbon pollution fee -- has successfully cut both income taxes and climate pollution without hurting the overall economy.

A simple price on carbon, like BC's Carbon Tax, has elements that could make it a preferred choice of many in a global climate solution:

Corporations like predictability and simple rules, so it doesn't surprise me that BP would prefer a simple price on carbon. Whether BP is worried enough about unchecked global warming to actually push for an effective carbon price in time will be interesting to watch.