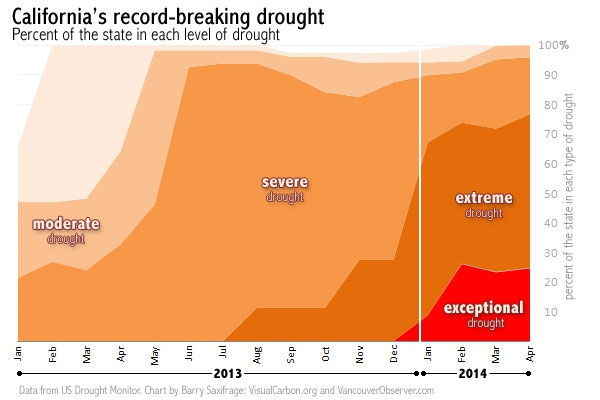 “The climate system is an angry beast, and we are poking at it with sticks” -- paleoclimatologist Dr. Wallace Broecker

On the west coast, California is suffering its worst winter drought ever recorded. The failure of the rainy season left critical snowpack levels at just 30% of normal. And half of that meagre amount melted in a single week in mid-April. Take a look at the satellite images below of the California and Nevada snowpack this year vs last year. 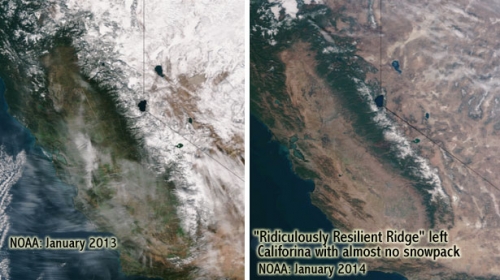 As the Washington Post reports, the climate threat revealed by these images wasn't lost on the American President:

The satellite images viewed by President Obama before a meeting with eight Western governors were stark, showing how snowpack in California’s mountains had shrunk by 86 percent in a single year.

“It was a ‘Houston, we have a problem’ moment,” recalled White House counselor John D. Podesta, one of two aides who briefed the president that February day. Obama mentioned the images several times as he warned the governors that political leaders had no choice but to cope with global warming’s impact.

In California, extreme water rationing is being imposed on one of the world's most important food producing regions. Food prices are rising. Damage estimates exceed $7 billion ... so far. Large parts of the state broke records for the hottest January thru March in over a century of record keeping. And the emerging wildfire season threatens to be especially brutal even by California standards.

As California suffered record-heat and record-drought, to the east a series of frigid "polar vortex" storms hurtled down from the Arctic bringing months of snow and bitter cold to hundreds of millions of people. The Great Lakes region suffered their coldest winter on record. Ice cover on the Great Lakes broke records for March. Damage estimates top $3 billion.

Meteorologists watched as a "remarkably extreme jet stream pattern" got stuck for months over North America driving both the record California drought and the parade of "polar vortex" storms to the east.

Now a new study in Geophysical Research Letters shows that global warming helped push this jet steam pattern to be the most extreme on record. Even more troubling, the occurrence of this highly-distorted jet stream pattern has been intensifying in recent decades and is expected to get even more extreme as the climate warms. This freak show of epic drought in the west paired with polar storms in the east is likely to become more common and more ferocious in step with our rising CO2 emissions.

Below is this year's story -- in three acts -- of how our fossil-fuelled global warming has helped fuel this double-trouble weather disaster.

Global warming has dramatically increased -- by five times -- the number of "hottest ever" monthly temperature records around the world. That means four out of five of the "record warmest" hotspots we are seeing have been cooked up by our fossil fuel CO2. With that in mind, take a look at this winter's "record warmest" and "record coldest" around the globe: 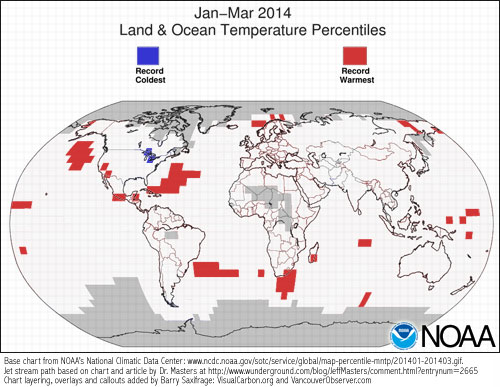 According to NOAA, only two small areas of the globe set "all-time coldest" records for the three month period of January thru March. Both were around the Great Lakes. In contrast, the areas setting "all time hottest" records were vastly larger. This is what global warming looks like. Record hotspots are expanding even faster than record cold spots are disappearing.

One area of record hotspots in particular -- the huge blob off the west coast of North America and nearby parts of California -- is the main character in our story today.

Above these record-breaking hot spots along west coast, was a strong and persistent ridge of high pressure in the atmosphere. It was so unusual that meteorologists nicknamed it the "Ridiculously Resilient Ridge." This ridge got stuck in place for months. I've added this extremely persistent high pressure ridge to the map. 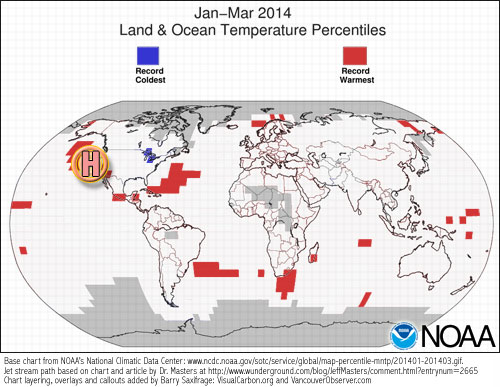 Act 3 -- The case of the "remarkably extreme jet stream pattern"

In a normal winter, the jet stream carries rain-laden Pacific storms across California. But this winter, the "Ridiculously Resilient Ridge" was so strong that it blocked the jet stream's normal path. Instead the jet stream was forced to go around this massive and unmoving ridge of high pressure. The jet stream, with its parade of storms, was deflected north to Alaska before it could plunge back south and then onward through the middle of the continent. 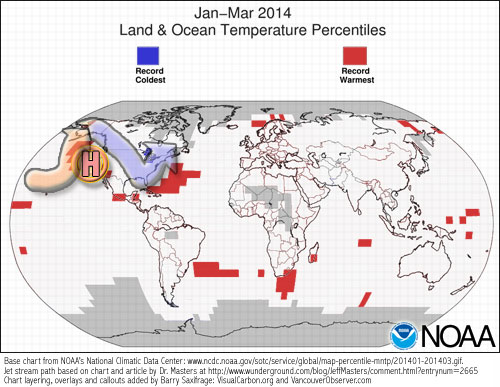 The storms that are critical to California's water supply and agriculture were denied entry and sent up to Alaska instead. This flow of relatively warm air surging north caused parts of Alaska to break high temperature records this winter.

As the jet stream curved around the ridge and dropped back to the south it forced some of the frigid Arctic air -- normally contained up there by the "polar vortex" winds -- to spill southwards. This bitter cold air surged across much of the continent as far south as Florida.

The weather got turned so upside down that there were times in January when it was warmer in Alaska than it was in deep-south states like Texas and Georgia.

When Alaska in January is the new hot spot in America it is clear that something extreme is happening to our weather.

"...the main consequence of global warming is not warming at all but instead increasingly violent swings in the weather, with droughts and famine in one area occurring at the same time as flooding in another, and snowstorms in one region at the same time as hot spells in another." -- Michio Kaku, professor of theoretical physics at the City University of New York

The next page has another NOAA chart showing just how widespread record hot temperatures were this winter...

Twenty one ways America would destroy a safe climate -- and one way they won't: US govt. report

Growing outrage over inaction on missing and murdered Aboriginal women