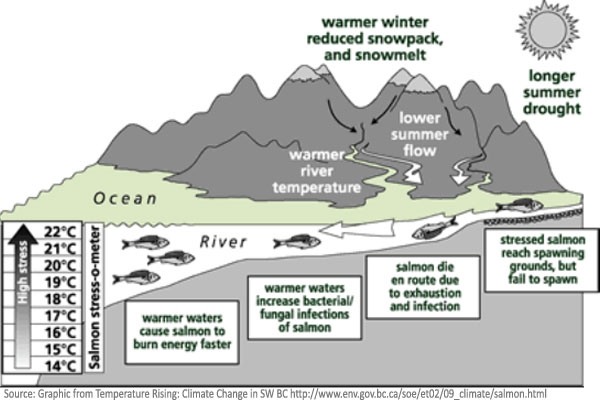 Global warming has already significantly changed our Fraser River. Its waters are warming and its flows are shifting to earlier in the year. By summer when the legendary salmon runs surge into the river to spawn, the river is more often becoming too warm and low for their survival. Already more and more salmon are dying en route to the spawning grounds. Fishing quotas are being cut back to make up for it.

Experts predict far more "dramatic changes" lie ahead unless humans switch away from climate polluting energy sources. They say our salmon will be hard pressed to survive and thrive in the new overheated Fraser River we are creating.

The Fraser River drains a watershed larger than the state of Washington. The CO2 from the burning of oil, coal and natural gas has changed the climate significantly in this huge watershed. Average air temperatures are rising, average snowpack is declining and rainfall has changed throughout of the year. The river that drains his huge changing landscape is being changed as a result.

Water is now coming down the Fraser River earlier and earlier as the climate warms.

The mid-point of the annual flow now happens much earlier on average than in 1950.

For example, my chart below shows the percentage of annual flow each year that already passed Hope by July 1st.  The trend towards more and more of the annual flow passing before summer starts is clear. 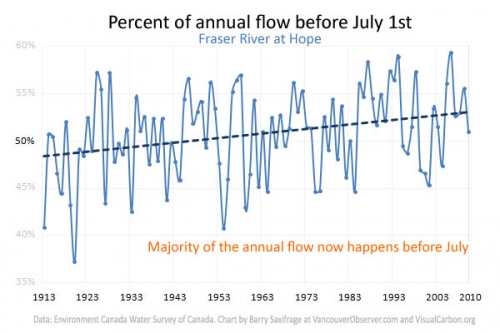 Fisheries and Oceans Canada (DFO) expect this trend to continue as long as global warming keeps getting worse. Their climate models show "dramatic changes in the flow of the Fraser River" as more and more of the flow shifts away from summer and into the winter and early spring. The lower the summer flow the warmer the water.

The cause of this shift in flow away from summer is the decline in our late-season snow pack as BC's climate heats up. The Fraser River is a "typical snow melt dominated river". That means flows are lower in winter while snow is accumulating, followed by rapidly rising flows in spring as snows melt and rains start. But now snowfall is decreasing and rising temperatures are melting it sooner. Less and less snow remains by summer.

Global warming is causing the Fraser River, like the air around it, to get warmer. The BC Ministry of the Environment's climate change website states:  "The average summer temperature of the Fraser River increased by 1.1°C between 1953 and 1998." Here is their chart: 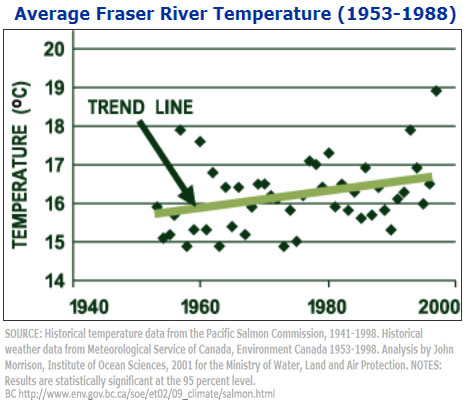 This warming appears to have increased significantly in recent decades.

A technical report for the Cohen Commission -- A Review of Potential Climate Change Effects on Survival of Fraser River Sockeye Salmon (CCCC) -- states that the Fraser has now warmed by 2.0 C in the last sixty years, with 0.7 C of that occurring in the last two decades.

Fisheries and Oceans Canada also expect this heating trend to get much worse as long as global warming continues:

Here is their chart: 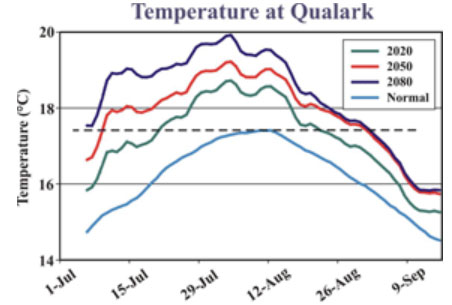 Rising temperatures are very bad news for salmon. The CCCC report summarized 64 scientific studies trying to understand the impact of just 0.7 C warming over the last two decades. It found "survival of returning adults has very likely decreased" and "the cumulative impacts of climate change on survival across life stages could have been substantial."

Both this CCCC report and the DFO predict an increasingly hostile and tenuous future for Fraser River salmon if we allow global warming to continue.

The Fraser is the largest salmon producing river in Canada. And it is heating up relentlessly...

Temperature is the "master environmental factor" for salmon, as it is for almost all fish. As the graphic at the top of this article illustrates, warmer river temperatures stress adult salmon in many ways, causing more to die before spawning. Females with their extra energy needs are even more susceptible than males. The DFO is blunt about what is coming if we don't switch away from dirty energy...

A letter from the BC Mayors Climate Leadership Council