By the end of the century it is expected that at least every second year will have conditions that are more detrimental to spawning than the worst year in the normal period [1960-1990].

We are creating a river in which half the years will become more deadly to salmon than the worse year they had to deal with normally. In case that isn't clear enough they provide the following chart using dead salmon as symbols: 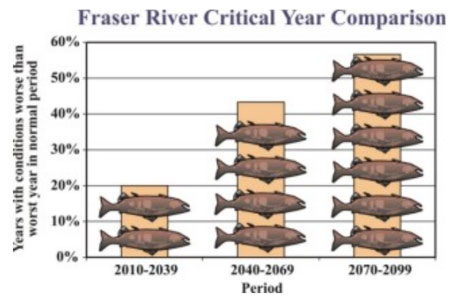 The relationship between river temperature and survival during the spawning migration has been extensively studied. Migration mortality of adults (termed en route mortality) becomes elevated at temperatures > 18 C

River temperatures in the summer months when salmon are migrating upstream have increased by 0.33 C per decade since 1950. Thirteen of the last 20 years have been the warmest ever recorded for the Fraser River.

As water temperatures have risen, en route mortality has increased. The CCCC report says that the abundance of sockeye salmon in the river has been studied since 1977 but it wasn't until 1992 that any significant en route mortality was reported:

Generally, en route loss begins to be reported in 1992 for Early Stuart, Early summer, and Summer-runs, but not until 1996 for Late-runs. Relative to total catch and spawning ground escapement, levels of en route loss have been increasing

The BC Minsitry of Environment, the DFO and the CCCC report all describe numerous examples of how climate change is impacting almost every life stage of salmon. They all say these impacts will grow much worse as if we allow the climate to warm further.

Death by a thousand cuts

It is a tale of death by a thousand cuts. Each cut isn't enough to kill, but at some point the cumulative impact is deadly. Only recently have experts turned their focus on the cumulative climate impacts on salmon. The CCCC report tells of a recent report (in press) that evaluates the combined impact of each of these individual impacts:

the author used his expert knowledge to argue that the cumulative impacts of climate change across life stages will be much greater than the impacts on individual stages. He concludes that the 'impacts will also carry forward to the next generation, potentially leading to a downward spiral of productive capacity' and predicts a bleak future for Fraser River sockeye salmon, in which most of its habitats may become inhospitable.

We rapidly warmed BC's forests and our pine trees were decimated. Our pine forests won't recover their former health and range because we have destroyed the climate conditions they require. We've handed the keys to our forests over to our arch-competitors: insects and fire. Now our iconic and economically important timber industry is on the ropes. Triage apparently includes cutting into formerly protected forests because there just aren't enough living trees left in the traditional timber supply areas. And then what?

We are also rapidly warming and altering our great river systems like the mighty Fraser River. Our iconic and economically important wild salmon are already suffering as we destroy the climate conditions they require. Quotas have been cut for the wild salmon fishery in recent years to offset the increasing en route deaths caused by warming rivers.  The future for our wild salmon and the people who love and depend upon them looks bleak if we don't quickly switch away from oil, coal and natural gas.

A letter from the BC Mayors Climate Leadership Council