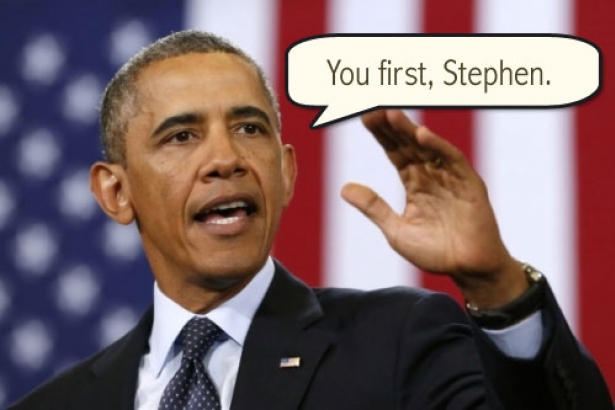 Yet another procedural delay means US President Barack Obama won't have to decide on the controversial Keystone XL tar sands pipeline until sometime next year. Before then, Canadian Prime Minister Stephen Harper must decide on one -- and possibly two -- bitterly-fought and politically-toxic tar sands pipelines in his own nation:

Back when Obama had to decide first, Harper famously chided the US President for delaying his own politically-toxic tar sands pipeline decision by calling it a "complete no-brainer". One has to wonder if Harper still feels that way now that he has to lead off?

The sudden role reversal leaves Harper in a much more difficult position. If Obama had decided on Keystone XL (KXL) first, Harper could have gained some welcome cover no matter which way the decision went.

Any such hope of political cover or advantage for Harper seems to have slipped away with the KXL delay.

Now it is Obama's turn to sit back and watch from the sidelines. Obama, not Harper, will get to triangulate and gain political cover from the other's decision. Maybe this was Obama's plan all along.

For Harper, being forced to lead off with a decision on the Enbridge Northern Gateway pipeline to the BC coast is an absolutely miserable scenario. The bitterly-opposed pipeline clearly lacks the required "social license" in BC at this point. And the rapidly approaching June deadline leaves Harper too little time to change the disastrous politics surrounding this pipeline before he has to decide.

The list of people in BC who are outraged by this proposed pipeline is long and daunting. It includes dozens of fiercely opposed First Nations whose unceded traditional territory covers big swaths of the pipeline route. Even the tidewater town, Kitimat, that would reap large economic benefits by being the terminal city defied expectations and voted to reject the pipeline.

Sensing an epic disaster in the making, the normally pro-tar-sands Vancouver Sun just penned an editorial titled: "It’s time for sober second thought on megaproject." It is a plea for Harper to delay the decision:

"Northern Gateway, regardless of its strategic economic importance to Canada, simply does not have the social licence necessary to proceed, at least, not for now. Forcing the project through would only be a provocation, triggering legal action and possibly blockades and civil disobedience along the pipeline route."

... But why must the matter be decided by June?

Hoisted with his own petard

Harper has repeatedly railed against delay on pipeline decisions. He even pushed through wholesale changes in Canadian laws to force a "15-month maximum" limit for decisions on pipelines and major infrastructure projects. He also shifted final decision making over to his own federal cabinet.

Harper's new rules require him to decide by June on Enbridge Northern Gateway and then by March for Kinder Morgan Trans Mountain.

Obama, by going second, stands to gain from any of those decisions. Harper, by going first, stands to lose from all three. His political lose-lose-lose decision on Enbridge Northern Gateway pipeline is just weeks away.