“You can’t drink the oil, you can’t eat the money”: First Nations women to the Nobel Women’s Initiative delegation 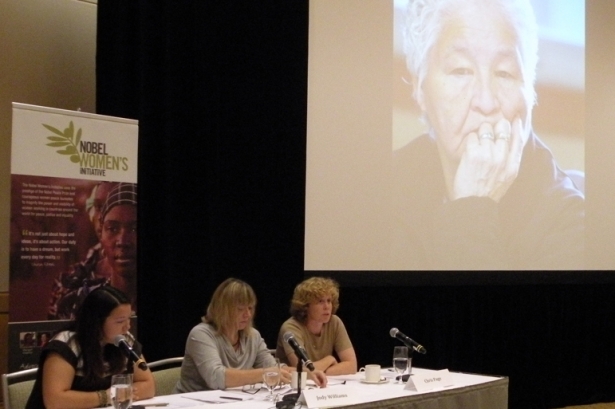 Kandi Mossett of the Indigenous Environmental Network, Nobel Peace Prize recipient Jody Williams and Chris Page of the Center for Environmental Health presented the findings of their visit to communities impacted by the oil sands and Northern Gateway Pipeline proposal at a press conference October 16.

You might recognize Jody Williams' type: the woman who always gets asked to speak at rallies because she has a gritty way of speech, a full bore commitment to her cause and a voice is big enough to reach the back of the crowd. Jody Williams won the Nobel Prize in 1997 for her work as strategist and spokesperson in the effort to ban land mines. 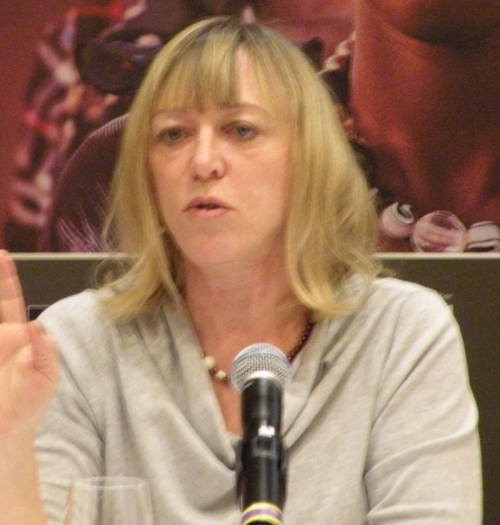 Jody Williams received the Nobel Peace Prize in 1997 or her work as founding coordinator for the International  Campaign to Ban Land mines which resulted in an international ban against anti-personnel land mines.

To Williams, peace is security. Not national security, but human security, where people have what they need, like clean food and water. She sees the Nobel Peace Prize platform as a tool to amplify the voices of women who are in the path of industrial projects that put these things at risk. This brought her to Canada as part of a six-woman delegation to tour communities affected by the oil sands and the Northern Gateway Pipeline proposal.

Kandi Mossett of the Mandan, Hidatsa and Arikara Nations of North Dakota, is part of that delegation and also works for the Indigenous Environmental Network. “Women are water keepers,” she said. “So they are often the first to understand what is going on.” She found that the First Nations impacted by oil sands projects had not given “free, prior and informed consent.”

Such consent is required under the UN’s Declaration on the Rights of Indigenous Peoples, to which Canada is a reluctant signatory.

“Consultation was being paid to attend a picnic,” she said, “and then being asked to pose for a picture. The result of these projects was that people couldn’t even use the water in Fort McKay for five months. Mothers couldn’t bathe their children.”

Both Mossett and Williams were heartened by the spirit of the women they spoke with. “These were warrior women with their fists in the air saying they will stop the Northern Gateway Pipeline and, ultimately, the tar sands,” Mossett said.

Williams said, “I wanted to stand up and cheer every time I heard a grandmother, sometimes next to a daughter nursing a granddaughter, stand up and say, ‘It will not happen.’ Not ‘we hope we can stop this,’ but ‘we will lay down in front of the bulldozers and we will not let them pass. These women were not joking.’ In Williams’ words, “They will drive a stake through the heart of the tar sands.”

Mossett spoke about food security impacts on traditional territories as a result of oil sands pollution.

“People still heavily rely on subsistence lifestyles,” she said. “The moose have huge pustules that they are cutting off and then they aren’t sure if they should eat the meat. Ten percent of the fish pulled out of the Athabasca River have some time of tumor or cancer or double jaw.”