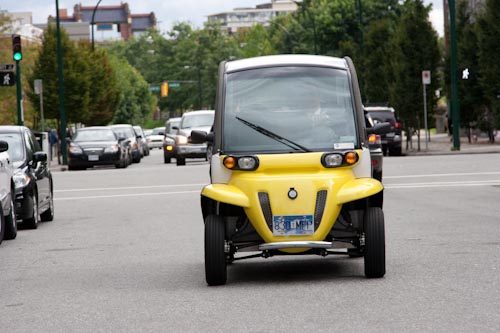 Road closures and designated traffic lanes, plus 250,000 Olympics visitors in Vancouver spell massive reshuffling for commuters this month and next. Fifty-thousand motor vehicles cross the Cambie Bridge, on average, every day in Vancouver. During portions of the Olympics, only pedestrians and cyclists will be allowed over it.

Travelling west along Broadway on the 99 B-line from Main St to Oak at noon today, traffic was light but the bus was packed with some passengers riding next to the front door. The driver waved his left arm at the crawl of cars (and buses) heading east on Broadway and muttered something about the Olympics under his breath to explain why his bus was late and over full.

As in any crisis, there are choices. Grumble! Ignore it! Focus on other things. Or go to Hawaii until the cherries blossom!

A fifth choice doesn’t preclude any listed in the last paragraph. Mayor Robertson aims to shuttle Vancouver to greenest city on the planet status by 2020. What if we all take the rising wave of Olympics über-traffic hitting Vancouver as an urgent reminder to decrease the growing flood of cars and trucks on our roads?

Vancouver and our Metro region fall under the jurisdiction of the 2007 British Columbia Greenhouse Gas (GHG) Targets Reductions Act. The Act mandates GHG emissions to be 33 per cent below 2007 levels by 2020, and at least 80% less by 2050!

One would expect Metro Vancouver’s 30-year regional plan, in the making, to include measures to drive the region to meet the legislated targets. Paradoxically, the draft plan does not come close. It only calls for a modest reduction in the increasing rate of km driven, all in relation to expected local population growth to 2040.

Half the population of BC lives in Metro Vancouver, so our choices can leverage large impacts province-wide.

When asked to comment on urban transit choices, Segall did some research and offered this chart to the Vancouver Observer: 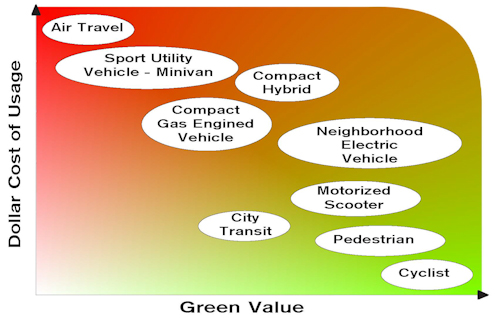 The vertical (Y) axis shows relative dollar cost of each urban transit option, including both original manufacturing costs and costs to run each type of vehicle. The horizontal (X) axis shows relative green value, accounting for both environmental impacts of vehicle production and CO2 (GHG) emissions, by km driven.

Look at the top left of the chart to see the most expensive and environmentally harmful and the bottom right to discover the most economical and green valued urban transit choices.