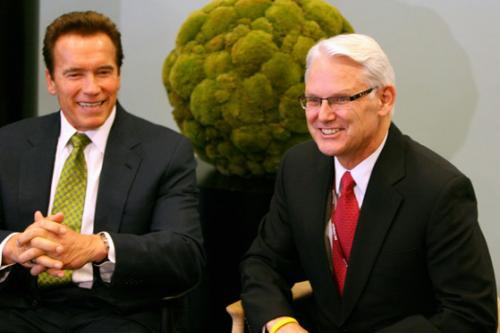 Canada committed to reduce greenhouse gas emissions (GHGs) by 6% below 1990 levels by 2012 under the Kyoto protocol. Instead, Canada’s emissions have increased by 24%.

The Harper government ties its climate action to the US, which didn’t even sign on to Kyoto. There was some hope for legislative action in both countries when Obama was elected, but that hope sank with the most recent US election of climate deniers and the unelected Canadian senate’s obliteration of the House of Representative’s climate bill.

Given paralysis on the national level, the subnational governments shine a beacon of hope. BC is part of the Western Climate Initiative, along with Manitoba, Ontario, Quebec, Montana, Washington, Oregon, Wyoming, Utah, Arizona, New Mexico and, last but not least, California. The WCI jurisdictions set the target of 15% less greenhouse gas emissions than 2005 levels by 2020.

BC’s target is more ambitious than the WCI’s: to reduce emissions to 33% less than 2007 levels by 2020, and to 80% less by 2020.  The Climate Secretariat moved forward first with the carbon tax and now is drafting regulations on a cap and trade system. It will be implemented in 2012. (There’s an opportunity to comment on its Emissions Trading and Offset Consultation Papers)

In the proposed cap and trade system, the government sets a cap on carbon emissions for each year based on historical practices, benchmarks in competing jurisdictions and the legislated target. Those allowed emissions, or allowances, are distributed to emitting industries. At reporting time, each emitter must have allowances in equal number to its emissions. Initially all allowances will be free followed by a transition period in which some are auctioned. By 2020, all the allowances will be auctioned. Over time, the government will ratchet down the number of allowances (the cap) to meet the provincial target.

Companies that have more emissions than allowances can purchase allowances from other companies that no longer need them or can purchase offsets. Offsets are sold by third parties that create and manage carbon reducing projects. Projects have to go through an independent validation and verification process to be approved by the BC government. The Pacific Carbon Trust was created to provide offsets to BC industries.

The BC government is trying to walk the fine line between real emissions reductions and keeping its oil and gas industry competitive in a marketplace where carbon pricing is just catching on. There’s an even finer line, or perhaps direct conflict, between the oil and gas industry forecasts of 300% growth and the call by scientists for close to 100% reduction of fossil fuels by 2050.

In particular, the natural gas industry hopes to expand by positioning itself as “better than coal.” But it might want to consider infrastructure investments in technologies that citizens will want to have around for more than a decade or two. The movie “Gasland” has battered the reputation of natural gas as a “clean” fuel even before it combusts into carbon.

Half of BC pines dead from fossil fuel pollution. Is it over?