Oil money on the campaign trail 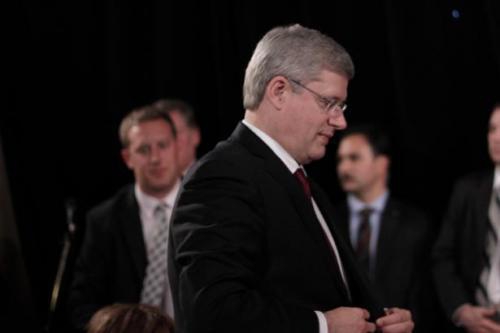 As regulatory hearings take off this week in Kitimat, the heated debate around Enbridge’s Northern Gateway pipeline has got the whole country talking.

Allegations from the government about environmental “radicals” and funding from foreign special interest groups have led many to question funding to groups on the other side of this argument.

Why is Prime Minister Stephen Harper so passionate about the oil sands and about pushing this pipeline through? Surely the billions of dollars in estimated “economic benefit” must have something to do with it. But to risk the environment and the trust of an entire province, there must be more to it than that. Lobbyists are one thing, but what about campaign funding?

To get a sense of Enbridge's influence, VO decided to take a look at political contributions and other donations to Harper and the Conservatives, as well as campaign contributions from the company most deeply involved in the Northern Gateway debate – Enbridge.

According to the Canada Elections Act, registered parties and political candidates must disclose the source of any financial contribution over $200. And as of 2007, only individual citizens are allowed to make campaign donations, meaning leadership candidates like Stephen Harper can no longer directly accept funding from corporations.

A quick search through Harper’s campaign finances for the last election in May 2011 shows minimal contributions from a list of individuals (each individual is only permitted to give $1,000 per election or calendar year). Such “contributions” totaled just $11,088 while “transfers” from the “Calgary Southwest Conservative Association” added up to $68,000.

There are detailed regulations around transferring funds between affiliated political entities, but they must be reported and are therefore available on the Elections Canada website. What’s more unclear is the source of funding for individual party associations, like Harper’s Calgary Southwest Conservative Association. But even if it did come from corporations, these numbers are still pretty small in the scheme of things.

In 2008, the Ottawa-based group Democracy Watch released a statement urging politicians to close loopholes in the law around financial contributions. They say these loopholes effectively permit secret and unlimited donations, potentially from corporate interests. So could this be what’s happening? If it is, they certainly don’t make it easy to find out.

Federal election reports don’t appear to reveal too much, but provincially it’s a different story. Most provincial election websites provide easy access to party and candidate financial reports. So how is money from big oil distributed at the provincial level?

For the sake of relevance, let’s look specifically at contributions from Enbridge.

On the Elections BC website, a search for “Enbridge” as a contributor returns a long list of results from the past few years. And it seems the company has played it smart – all contributions went the BC Liberal Party.

Between Enbridge Incorporated and Enbridge Northern Gateway Pipelines, the company has contributed more than $56,000 to the BC Liberals since 2005.

Perhaps that’s why Premier Christy Clark said the coast doesn’t just belong to British Columbians – some would say Enbridge has put a down payment on a piece of it.

The BC Election Act does not put any limits on contributions, and allows contributions from corporations, businesses, trade unions and nonprofits. But Alberta, on the other hand, limits contributions to $15,000 per year.

In Alberta, Enbridge contributed a total of $19,950 to provincial political parties and candidates in 2010 alone. Though many of the contributions were directed at the Progressive Conservative Party, part of the money went to individual candidates and even the Alberta Liberals. Since 2005, Enbridge’s political contributions in Alberta have reached over $120,000.

In other provinces, the company seems to spread the money around a bit – a few thousand dollars to the Saskatchewan Party, a few hundred to the NDP, some to the Ontario Liberals. The numbers get smaller as you move east, likely because they’re the provinces with less of an interest in Western oil and gas development. Corporate contributions are also banned in some provinces, including Manitoba, Quebec and Nova Scotia.

So for all this digging, what have we learned?

For one thing – it’s not that easy to prove where all the money's coming from. But there are still hints of corporate influence, particularly in BC and Alberta where the battle will be waged for the duration of this year’s pipeline hearings.

This is just the tip of the iceberg when it comes to tracking political funding. There are a lot of other ways corporations can get their hands into politics, and the corporate lobby is another story altogether.

What do you think? What else is involved in the give-and-take between Canadian oil execs and policymakers?