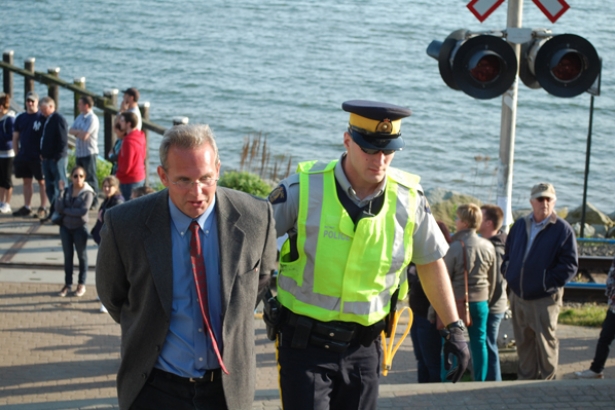 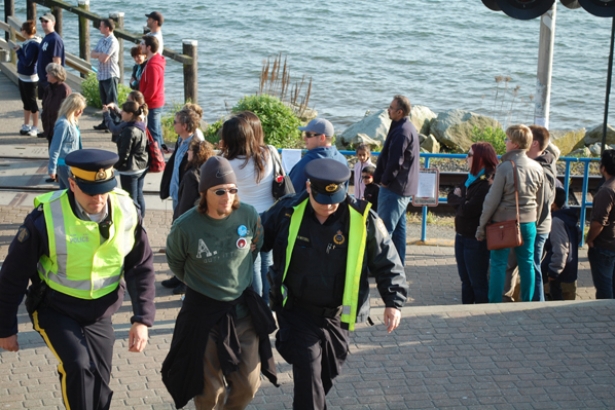 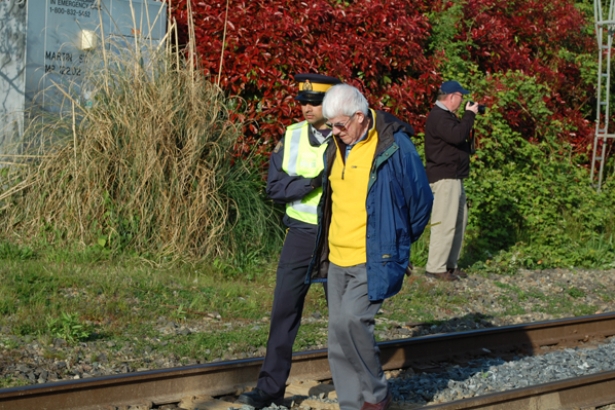 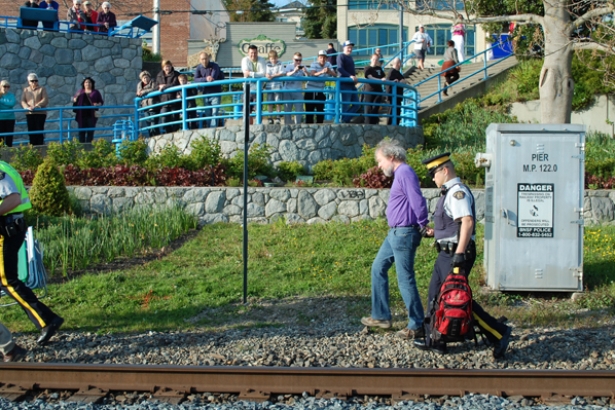 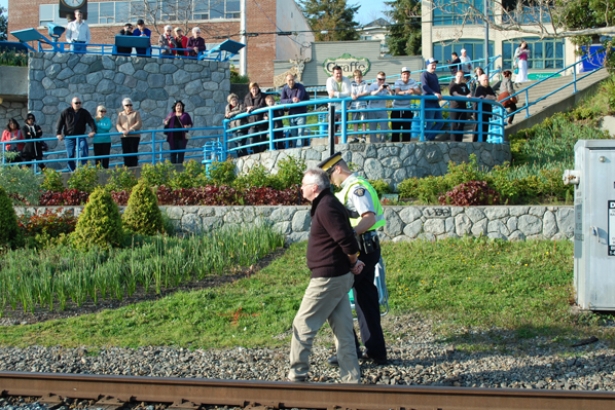 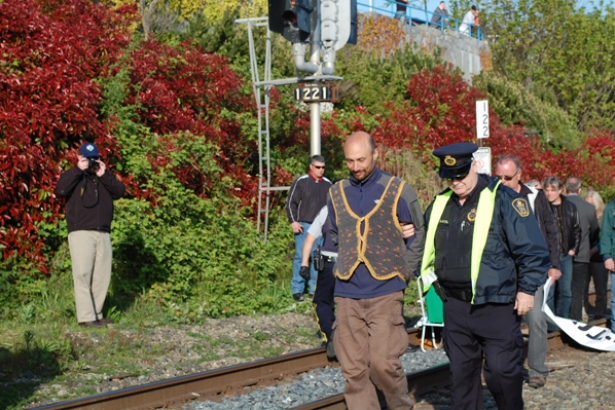 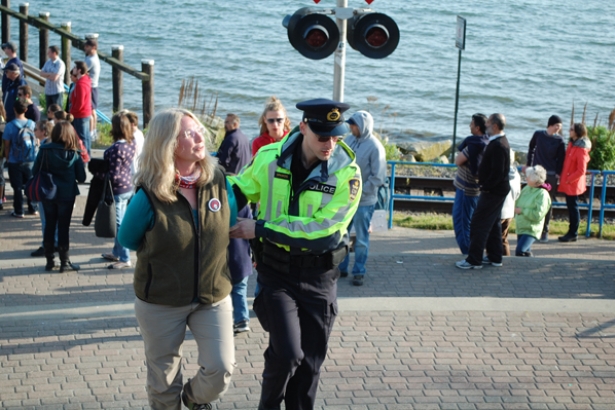 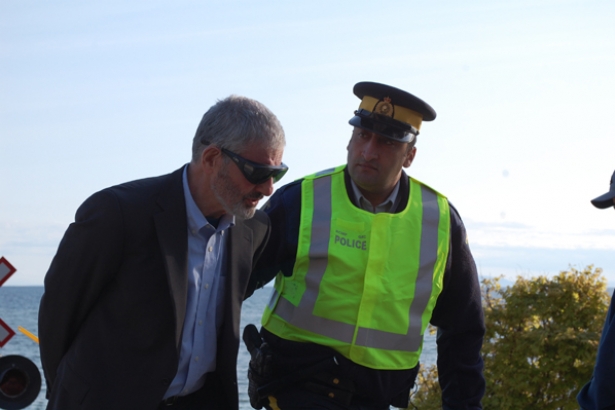 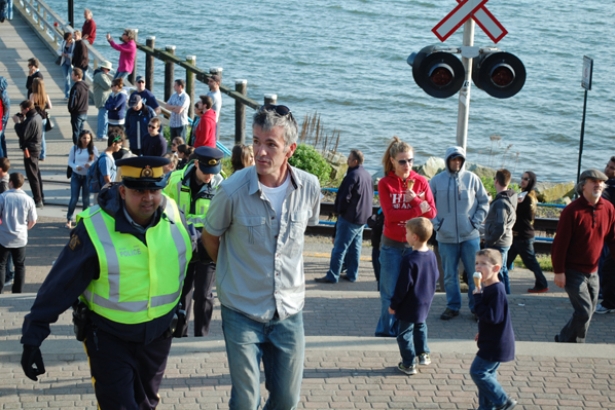 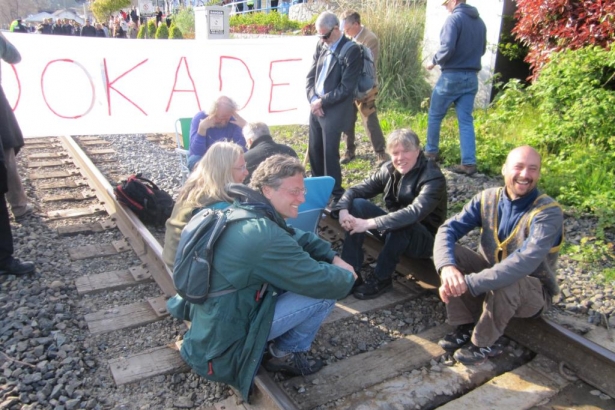 After waiting since midnight, arrest for the civil disobedience of blocking a coal train came at 6 p.m.

Thirteen Canadians were arrested for civil disobedience at 6 p.m. after sitting down on the tracks in front of an oncoming coal train in White Rock. Their vigil began at midnight, but Burlington Northern Santa Fe (BNSF) cancelled many of its scheduled runs in anticipation of the protest.

Coal is a likely target for climate stability advocates because it has the highest greenhouse gas emissions per unit of energy of all fossil fuels and because there is enough economically available coal to trigger run away climate change. Over eight million tons of coal from Powder River Basin, Montana traveled through the lower BC mainland in 2011.  BNSF transports the coal through White Rock to the Westshore terminals. BNSF is owned by Warren Buffett’s Berkshire Hathaway Inc.

Will Horter, one of those arrested, stated, “We brought attention to the massive  size and increase in the transport of coal through BC and took an action that we hope will ill inspire citizens to assert control in a dangerous situation in which the political leaders are failing to protect our children’s future.”

The climate stability advocates were charged under the Railway Act and fined $115. They have a right to a hearing to contest the charges. 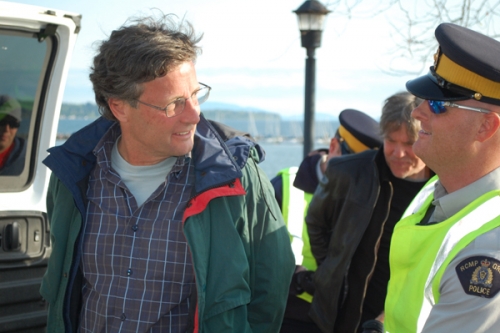 “If governments were acting to reduce GHG emissions, or slow the rate of increase, I wouldn’t be here today,” he continued. “I’d be helping those governments to do that. But in the last few years, especially in Canada under Harper, the emphasis has been on accelerating the rate at which we are destroying the planet. So I have to ask myself and I have to ask everyone else, ethically, what is the right thing to do? It’s made me read more about civil disobedience, people like Mahandas Gandhi, Martin Luther King and Henry David Thoreau.”

Rather than appreciation for his civil disobedience, Jaccard encourages participation. “I really think that we should all be doing this,” he said. “I’m here drawing attention to myself for ethical reasons, but I don’t want to be a martyr. I’d much rather that there were 10,000 of us out here. Everyone has the ability to know how dangerous the current situation is.”

Jaccard’s career as an environmental economist focuses on developing policies to move toward a sustainable economy. He’s participated in numerous governmental and intergovernmental assessments, including work for the International Panel on Climate Change. He has advised the US, collections of European governments, the State of California, and provincial governments including BC, Ontario and Quebec.

“We are heading for a real crisis in which we’ll have to start ripping infrastructure apart,” he stated in response to a question by another protester. “We can avoid that. Over 100 coal plants in the US were cancelled or put on hold because of people like us. It created a big increase in renewable energy and it is happening rapidly. Those places are avoiding a crisis.”

BC: Carbon gateway of North America