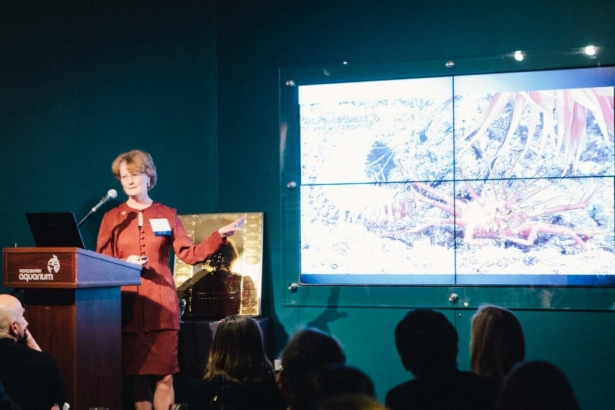 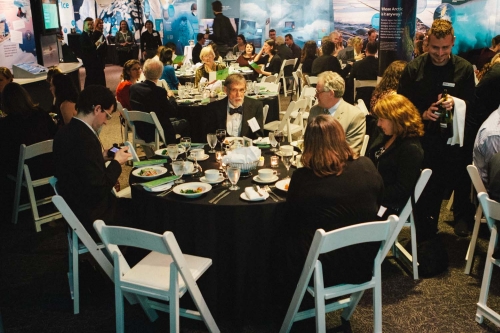 Both recipients gave presentations at the dinner held in the Canada’s Arctic exhibit. Dr. Devlin, very much the pure scientist (from the word-heavy PowerPoint presentation slides) spoke about his work in molecular biology where he developed the first transgenic Coho Salmon, by inserting growth hormones into their gene structure, which is undoubtedly the most controversial application of his research. He also developed the first Y-DNA probe that is able to determine the sex of salmon, a technique that is still widely used today.

Dr. Devlin now works on the impacts that transgenic salmon would have on the environment if released into the wild. Interestingly, the transgenic salmon are only much larger and more successful in lab conditions. When the salmon were tested in a re-created stream in the lab, they found the salmon had a lack of wariness of predators (which made them easy to pick off) and the competition for food meant they were more average sized, compared to the earlier slide Dr. Devlin had shown of scarily over-large 1yr old Coho.

Dr. Devlin described genetic modification of fish as a ‘more modern’ way of breeding fish (rather than selective breeding that has been done for centuries by humans), which is sure to cause much debate outside the confines of a laboratory. 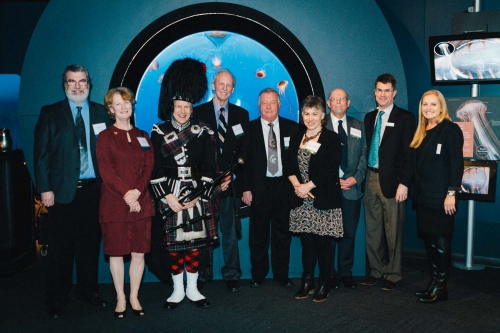 Dr. Verena Tunnicliffe prefers to spend her time outside of a lab and in a submarine. She was the first woman on the West Coast to lead deep-sea research expeditions from Vancouver Island, after coming to BC in 1980 with the intention of only staying for two years to do a bit of research.

In 1983, Dr. Tunnicliffe was part of the first discovery of hydrothermal vent systems off the coast of BC and had the unique experience of deep-sea exploration where ‘everything we found was new’ and led to the discovery of over 75 new marine species. The discovery of the hydrothermal vents (which included underwater active volcanoes) led her to develop the VENUS ocean floor cable observation network. VENUS was expanded to include the NEPTUNE network, which is the underwater webcam network that allowed a Ukrainian teenager to see the rare sight of an elephant seal eating a hagfish in January 2013, which made the news worldwide.

Dr. Tunnicliffe is involved in the joint Canadian and US deep-sea exploration project, where she recently went to Indonesia to work with local researchers and explore an area that hadn’t been looked at since 1900. Once again, at a depth of 800m below sea level, she observed species never seen before, sharing knowledge with local scientists and opening up knowledge of the oceans to local people.

Dr. Tunnifcliffe joked that she wants to go to 3,500m below sea level so that she can see halfway to the ocean floor, which really proves that when you’re sitting on the beach, you’re only halfway down the hill, but more importantly she wants to bring awareness of the ocean to people.

“That’s what the problem that we have is,” Dr. Tunnicliffe said “it’s that people cannot see what’s happening. If it’s up the mountain here and you’re seeing the clear-cuts, you connect to that. When it’s in the bottom of the ocean, with trawls going and mining happening, it’s out of sight, out of mind.”