Watch the trailer for Heartwood: Forest Guardians of Cortes Island, then please make a contribution to our crowdfunding campaign—and receive great "perks" in return.

There is a special feeling that you get when walk through an ancient forest. You feel surrounded by something more ancient and mysterious than the oldest tree in the forest. There is something much deeper going on there—a hidden power simmering just beneath the surface. And in some weird way, you can’t help but feel that the forest is very much aware of your presence.

I remember my first time on Cortes Island, producing a series of videos for the Vancouver Observer back in January 2012. I was taken into the woods by a knowledgeable group of Cortesians and Ancient Forest Alliance (AFA) campaigners Ken Wu and TJ Watt. We were going to see the Basil Creek Watershed, a section of forestland owned by Island Timberlands.

As we walked through an overgrown skid road surrounded by thick alder brush, they explained that this area was previously owned by Macmillan-Bloedel—a BC-based logging company that had amassed hundreds of thousands of hectares of private forestland before being bought by American lumber giant Weyerhaeuser in 1999. Weyerhaeuser sold the land to Wall Street investment firm Brascan, which has since changed its name to Brookfield Asset Management. Brookfield created Island Timberlands specifically to harvest its coastal timber holdings in British Columbia.

We turned off the logging road into the thicket of dense alders. The Cortesians reminded us that European settlers had almost completely logged this island at the turn of the century. We passed by huge stumps with notches in them about six feet up, where the fallers had inserted wooden springboards. This allowed them to get their axes and saws above the trees’ flared buttresses, making the enormous exercise of cutting down these forest giants by hand marginally easier.

MacBlo began clearing this area again in 1990. But a blockade led by the Klahoose First Nation prevented them from logging. MacBlo never returned to log on Cortes again. The island was deemed Socially Inoperable—a label that many Cortesians still wear with pride.

The moment we emerged from the alders, we stepped into another world. This forest was nothing like the one we had just stepped out of. It was more spacious. Sword ferns and skunk cabbage grew in swampy pools. Massive cedars and Douglas-firs towered above us. One Cortesian held out his arms in front of a tree and the diameter far exceeded his six-foot wingspan. This was a real old-growth forest.

Our guides began to speak of a vast underground network that permeates the entire forest. If you have ever seen a mushroom or a fungus sprouting from a log, that is simply the fruiting body of an ancient network of tiny filaments spread throughout the forest floor—known as mycelium. Over the millennia, the mycelium has developed a mystical alliance with the trees.

The Cortesians often quoted mycologist (mushroom scientist) Paul Stamets, who has his research lab on Cortes. Stamets has made groundbreaking discoveries into the hidden powers of mushrooms that only grow in the old-growth forest. Stamets says that these underground networks of mycelium are like “the Earth's natural Internet.” They can sense any impression on the ground, and can relay huge amounts of data about any organisms moving through the landscape.

Suddenly, that feeling I experienced when I stepped into the old-growth forest began to make a lot more sense. The forest really was aware of us.

Ken Wu of the AFA commented on how rare it is to find a stand of ancient Douglas-firs like this on the coast. Only one per cent of the original coastal Douglas-fir ecosystem remains. This grove on Cortes, overlooked by a century of logging, represents a small portion of that one per cent.

As we walked out of the forest, my mind was reeling with questions. How did this forest come to be private in the first place? How did we get to this point where one company can own hundreds of thousands of hectares of forestland? What regulations exist to protect communities such as Cortes from this kind of logging? Is truly sustainable forestry even possible on privately managed forest land? And how might that look? 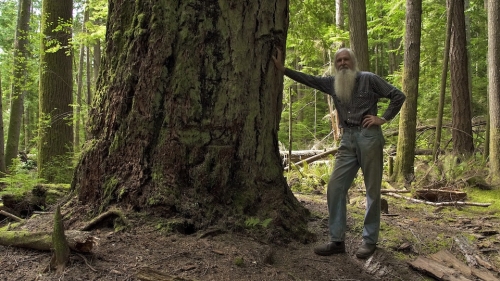 This past November, after a year of negotiations with the Cortes community, IT moved to begin harvesting the Basil Creek Watershed, the same forest we had walked through last year. In response, Island Stance—an ally within the Wildstands Forest Alliance committed to peaceful direct action—launched a blockade, along with others from the Cortes community, in exactly the same spot that the Klahoose had held theirs twenty years ago.

Cortesians have been on the front lines of this struggle for over 20 years. And I intend to be there to capture the latest chapter in this epic tale for my upcoming documentary Heartwood: Forest Guardians of Cortes Island. Heartwood will follow the Cortes community as it fights to defend its forests from industrial logging and attempts to build a new kind of forestry economy, in partnership with the Klahoose First Nation.

With the exception of that first trip to Cortes last January for the Vancouver Observer, this project has so far been totally self-funded. That is why I am launching a crowdfunding campaign, in order that I can keep traveling up to Cortes to capture this saga as it unfolds. Please help me to tell this urgent story of the Forest Guardians of Cortes Island—and not just the people, but also that mystical underground network of mycelium—the ultimate Forest Guardian.

BECOME A FOREST GUARDIAN—watch the  trailer and make a contribution to my Indiegogo campaign—and receive great “perks” in return!