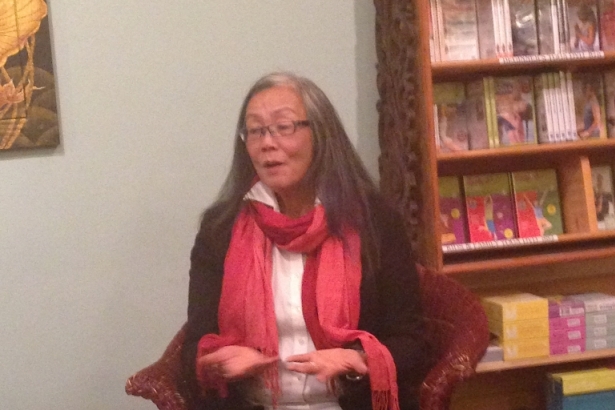 Shirley Chan’s mom Mary Lee Chan knew everyone in her Strathcona neighbourhood in 1968 when the plan to build a freeway through the middle of downtown Vancouver was set to go ahead. She was a local force to be reckoned with who negotiated to help find work for residents when they were struggling for employment and never took ‘no’ for an answer.

Mary Lee’s husband Walter Chan was respected and knowledgeable and wrote for the local Chinese language newspapers. Together they made a formidable team and led the charge to stop the freeway that would have demolished Strathcona and would run around Coal Harbour, ruining some of what is now the most valuable waterfront real estate in the city.

The sustainability benefits of not having a freeway through the middle of the downtown core include allowing for downtown neighbourhoods to flourish, pedestrian access to the waterfront and not creating the scary no-man’s land that currently exists under the Georgia viaducts are obvious today.

However, they were not the reasons the Chans started their campaign to stop the freeway – they were more immediately concerned with losing their neighbourhood and community. And they had no idea what kind of a fight they were getting themselves into.

Shirley Chan, who was 21 at the time, told me in an interview about how she was taken door to door in Strathcona by her mother to translate into English and hand out pamphlets and petitions against the freeway. Every time Mary Lee Chan was told it was too late or ‘the decision has already been made', she refused to compromise and allow the demolition of her community and block. She built her coalition further by having ‘block captains’ who would organize their street and keep everybody informed in true grassroots organizing style.

Being a Gen-Y and being somewhat cynical about the failed protest movements I saw as a university student, I wanted to know how it was that the Chan family managed to be so successful where so many other community campaigns have failed. According to Chan, it was a combination of keeping the community involved through regular updates and meetings, as well as making sure there was tea and baked goods.

I guess the old adage that the way to a person’s heart is through their stomach is true. Chan said that each Sunday, the community association they helped found would host a meeting with tea and goodies for anyone involved or interested in the campaign to stop demolition of the neighbourhood and the freeway, and when the then Federal Minister of Urban Affairs Robert Andras visited Vancouver, he was invited to a banquet in Chinatown which also served as a fundraiser.

The banquets were well attended by everyone, including the local bootlegger, and the whiskey flowed freely, making them a social highlight. Mary Lee,  Walter and other community leaders were persuasive enough that they won the support of the Minister, who announced that the federal funding for the project (which was 50%) wouldn’t go ahead without the support of the community group  called SPOTA (Strathcona Property Owners and Tenants Association).

Shirley Chan says this was the point at which they knew they were getting somewhere – their ‘aha!’ moment where they effectively became the fourth branch of Government sitting around the negotiation table. This was how they were able to get a permanent agreement, rather than just a delay of the inevitable bulldozers. Any decision that was made had to be agreed to by SPOTA as well as the Federal Government, Provincial Government and City of Vancouver, thanks to Minister Andras.

From the sounds of how formidable Walter and Mary Lee Chan were as campaigners, I bet they were seriously tough negotiators too. Eventually the freeway was not built and a revitalization of Strathcona was agreed to, ensuring that Vancouver’s downtown didn’t get the eyesore of an elevated freeway through the middle of it.

The revitalization plan wasn’t without its troubles, either (as getting everyone to agree on anything tends to be). The traffic-calming measures suggested by architect Bing Thom were met with complaints of ‘where will we park?’ and ‘we already can’t drive around here without traffic- you’ll make it worse'.

However they got through it, and instead of the Georgia viaduct being part one of a seven part junction of freeways that would have isolated the downtown core from East Vancouver, Vancouver got the unintentional benefit of a dense, walkable, liveable, more sustainable neighbourhood. And the key to making all of that happen was the connections Mary Lee Chan had within her community, and building a coalition within the community with shared food.

Tar Secret #2: What percentage of Canada's GDP comes from the tar sands?