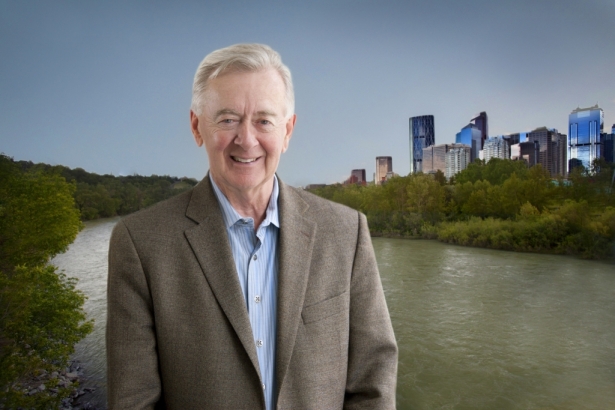 Preston Manning, former leader of the Reform Party of Canada, thinks carbon emissions are an externalized cost that should be included in the price of fossil fuel products.

Dr. Tom Pederson, the Executive Director of the Pacific Institute for Climate Solutions, introduced politician Preston Manning and columnist Jeffrey Simpson to the audience at the SFU Goldberg Center last night. He pointed out two records set last month. First, the amount of carbon dioxide in the atmosphere passed 400 parts per million for the first time in 800,000 years. Second, the Dow Jones industrial average closed above 15,000.

“Together, these events offer the issue,” Pederson said. “Our challenge is to break the ties that bind the economy to emissions.”

He noted that we are living through an unprecedented rate of change.

“Mother Earth has never served up so much change so quickly in all of Earth’s history,” Pederson said.

Preston Manning, leader of the Reform Party and MP for the Canadian Alliance until 2002, gave advice on how to approach conservatives regarding climate change.

He came to the issue through the second law of physics, the conservation of mass. When he fills his tank with 80 liters of gas, which is equivalent to 64 kilograms, it requires four tons of tar sands to create that gas. “What happened to the rest of the mass that is not in the tank?” he asked. “Was it dealt with in a manner that benefitted or harmed the environment?” What happened to the 64 kilograms when his tank returned to empty?

Through this understanding of physics, he came to the idea of full cost accounting: prices that cover the cost of mitigating or remediating the impacts caused by the products. He thinks this thinking is a way into the minds of conservatives.

Manning recommended also to start with climate affects that local people understand to encourage bottom up democracy. In the nineties, loggers in Alberta started to observe that the winters were no longer cool enough to kill of the pine beetles. Driller rough necks that used to get into the muskeg by November 15 weren’t able to get in until Christmas. Pile drivers in Tuktoyaktuk had to drive piles ten feet instead of six, because the permafrost had subsided. The ice roads north of Winnipeg started to melt in April instead of May. “Start with the local impacts,” Manning said, “because people are really noticing those. Then bring up the fact that scientists have been working on the problem and reached similar conclusions.”

Jeffrey Simpson is the national affairs columnist for the Globe and Mail and author of the 2007 book Hot Air: Meeting Canada’s Climate Change Challenge, along with Mark Jaccard and Nic Rivers. When that book was published, he thought climate change “had legs”, but the recession of 2008 “sobered the hopes.” He views climate change as a tragedy of the commons in which each owner of a single sheep claims no responsibility for the overgrazing of the field as a whole. “It will be hard to convince Canadians to assign a high priority to climate change without a sense of international engagement,” he said.

International engagement has fallen off due to the recession which brought the economy back to the top of the list of concerns. The Middle East has no interest in addressing climate change, nor does India. Mexico is taking action, as is China, where pollution is an issue feared by the government. Australia has imposed cap and trade with the intention of moving to a carbon tax, but Tony Abbott, the leader of Australia’s opposition party, has promised to repeal these measures and he leads Prime Minister Julia Gillard in the polls regarding an election in the fall. In the U.S., cap and trade legislation is dead and President Obama must act through the EPA. In Europe, economic perturbations have retarded progress and coal is back on the rise.

Simpson still thinks Canada should act. “People argue that Canada produces only 2 percent of the world’s emissions,” he said. “But that two percent has never guided how we act in the world. We wouldn’t have fought the world wars or contributed to foreign aid if we believed that Canada’s contribution had to be determinant.”

Our national reduction target under the Copenhagen Accord is 17 percent from 2005 CO2 levels by 2020. “We’re halfway down the track if you believe the government,” Simpson said. “But three quarters of that has come from provincial, not federal action, and the main cause was the economy tanking in 2008-2009.”  On its current path, Canada won’t meet its target.

According to Simpson, in the face of this failure, the Harper government has taken on the script of Ezra Levant regarding ethical oil. “It’s a perversion of ethics,” Simpson told the audience. “Over millennium, ethical traditions teach comparing oneself to the best, not to the worst.”

Simpson noted that Harper has not devoted a speech to climate change during his seven years in office. “He sees it as a shield issue,” he said, “not a sword issue that can win votes. He doesn’t see a point to expending political capital to educate or inform voters.” Simpson estimated that a third to a quarter of conservatives are climate skeptics.

“The irony of the present conservative government,” Simpson said, “is that in their approach to economic policy, they believe in markets and taxes, not regulation and subsidies. But in the climate change field, the carbon tax is out and the ‘heavy hand’ of regulation is preferred tool.” Simpson suggested that the Harper government applies such regulations “minutely and meticulously,” even though they are the least effective means of achieving behavioural change.

Simpson thought the Alberta government had made a serious strategic mistake in assuming that what is good for Alberta is good for Canada, B.C. and the U.S. He believes the better strategy would be to make an additional effort to reduce greenhouse gases to conventional oil levels, which could provide the social licence needed to export bitumen.

Like Manning, Simpson recommended a price on carbon. “The evidence is completely clear,” he said. “Unless you price the product you won’t get behavioural change. Other mechanisms, such as regulations and subsidies, create a greater burden on the economy.”