University divestment from fossil fuels taking off: municipalities are next

Bill McKibben and 350.org have completed their "Do the Math" tour of US universities. Next up are municipalities and pension funds. Photo sourced from 350.org Flickr.

The Harvard administration initially refused to meet with students on the issue of divesting from fossil fuels. But after a campus wide referendum in which three quarters of the students voted for divestment, they changed their minds. At that meeting, the board expressed doubt that divestment would help stop climate change, but they acknowledged that divestment would have a small impact on the $32 billion endowment fund.

At least 230 schools now have student groups working toward divestment from fossil fuels in endowment funds. At least 20 schools are now looking at divestment options and one, Hampshire College, has already divested.

Bill McKibben’s article in Rolling Stone Magazine, Global Warming’s Terrifying New Math, formed the basis for his “Do the Math” tour of university campuses. McKibben and 350.org modelled the divestment strategy on the anti-apartheid movement of the 1960s-80s.

The next stage of McKibben’s efforts will focus on city governments and pension funds. Seattle’s Mayor Mike McGinn has already taken action. Seattle’s retirement and pension funds have about $17 million invested in oil and gas companies. The city is looking at how to divest them, a process that could take as long as five years. In late January, the Vancouver City Council passed a motion to align the city’s cash investments and pension plan (managed by bcIMC) in line with its core values. 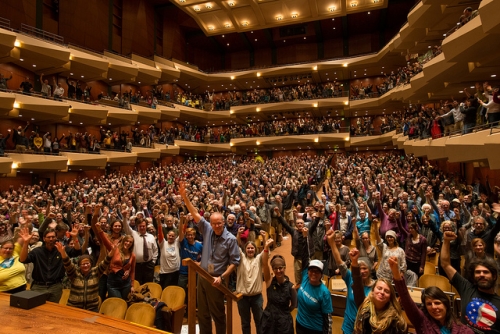 A recent study by the Aperio Group found that divestment results in neither a penalty nor benefit to investment returns. Constraining a portfolio can increase risk, but the study found a minimal risk from divestment of fossil fuels.

Given the “carbon bubble” – the valuation of companies based on fossil fuel reserves that a growing number of international institutions say must stay in the ground – divestment may be a prudent financial decision. It reduces exposure to scenarios in which governments take concerted action to put a price on carbon. The other scenario – described by the head of the IMF as  one in which “future generations will be roasted, toasted, fried and grilled” – seems an even worse outlook for fossil fuel investors, as well as everyone else.

HSBC, the world’s second largest bank, projects that a decrease in demand for high carbon projects could lead to project cancellation, especially for controversial and high cost projects. The pursuit of riskier sources of oil has already resulted in devastating loss of value. bcIMC CEO Doug Pearce called the collapse of BP’s stock prices following the Gulf of Mexico oil spill “one of the greatest environmentally-related destructions of shareholder value in history.”

A recent Ernst and Young report found that 37% of oil and gas respondents to its survey were in the process of selling assets or planned to do so over the next two years. Perhaps they too are reading the writing on walls (and in the reports of the International Energy Agency, the International Monetary Fund, the World Bank, PricewaterhouseCoopers and the UN).

Road to success for Canadian Pension Plan paved with complexity

"It's Our Future!": Vancouver youth rally to demand that Port of Metro Vancouver say "NO" to coal exports

One road to renewable energy, one road to climate instability