Where the whales sing 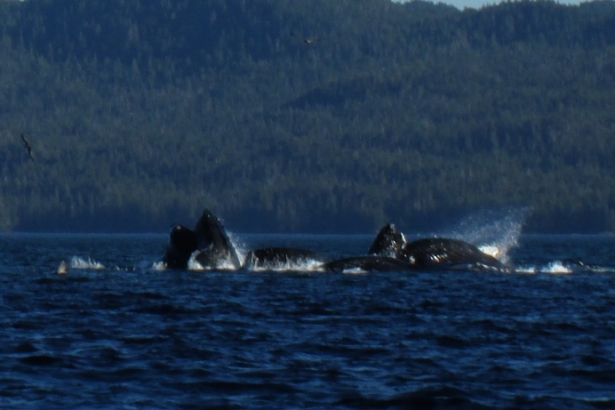 Humpback whales have a level of organisation for getting their dinner that goes beyond even my Type-A levels of organised. It’s called bubble-net feeding and it’s an organised 'football play' style of getting dinner that I was lucky enough to witness when I was in the Great Bear Rainforest this year.

The whales organise into groups of around 5 or 6 to feed and each whale has their role. When we were there this September, one of the head researchers from Cetacealab at Whale Point noticed that one of the younger whales had made the team this year. The younger whale had been trying to break into the feeding team for a few seasons now, and Janie the researcher had seen the young whale practicing the skills on his own.

The practice had obviously paid off – the young humpback had made the senior squad this year! The whales would go down under water in a certain order, and I watched as one, two, three, the same pattern markings on the humpback’s tails would go down underwater in the same order each time.

As they assembled underwater, we could hear through the aluminium hull of the boat we were in the whales calling to each other. Unlike Dory from the film Finding Nemo, I don’t speak whale, but I’d like to think they were saying things like ‘go right and cover the flank!’ or ‘make sure you don’t miss your start this time, newbie!’

Whether or not they were using the sporting analogies I imagine, what they were doing is organising a tight circle around a school of fish. Once they’ve got the fish circled, they blow a circle of bubbles around the fish, then dive down and all come up together through the middle with a giant mouth full of dinner. 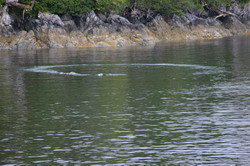 The circle of bubbles (photo: forwhales.org)

It must be thrilling (although not if you’re a fish) to be so skilful and coordinated to fish like that. I’m pretty sure if I had to rely on organising with a group of people to hunt my dinner I’d probably fail.

Whales coming up inside the bubbles and feeding (photo: Amy Huva)

We watched the humpback whales do this over and over for about an hour, as they had a great feed and started enjoying themselves and playing around a bit, while the birds hovered overhead to try and scavenge any leftovers and we occasionally saw fish scales floating in the water past the boat.

There have been more whales coming back to this area of the Great Bear Rainforest over the years after the 1982 international moratorium on whaling, but they may be at risk again – this time from tanker traffic.

The area we were watching the humpbacks feed in was Squally Channel, which is west of Gil Island. It’s a favourite bubble-net feeding spot for the whales. It’s also where the tankers carrying tarsands bitumen from the end of the proposed Northern Gateway Pipeline will travel on their way to Asia, and it means that if the project is approved that the noise pollution from the tankers will prevent the humpbacks from being able to hear each other to eat.

It’s not going to be very effective fishing if the team of humpbacks can’t hear each other over the sound of the tankers, which sound underwater like you’re standing next to a railway level crossing as a freight train goes by.

The risks to all the inhabitants of the Great Bear Rainforest – the marine life, the bears and other animals and the loss of human livelihood from the inevitable spills that will occur – are the reasons that this week WWF Canada launched their ‘Ask A Canadian’ campaign.

They’re asking Canadians and people around the world who care to say ‘no’ to the proposed Enbridge Northern Gateway pipeline. They want to create a voice loud enough that it cannot be ignored that tells the world that the Great Bear Rainforest is unlike any other place on the planet, and that the risks of the pipeline are too great. 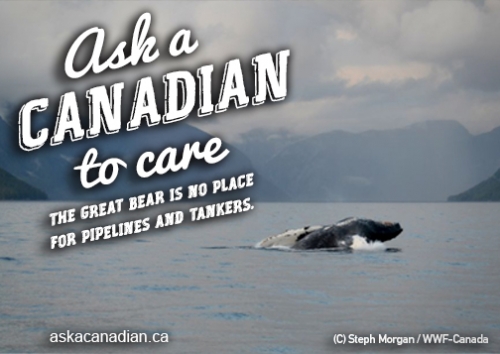 Add your name to the thousands of Canadians who have already spoken up to say that the Great Bear Rainforest is no place for an oil pipeline and tankers. I’m sure the humpback whales who can keep bubble-net feeding will thank you.