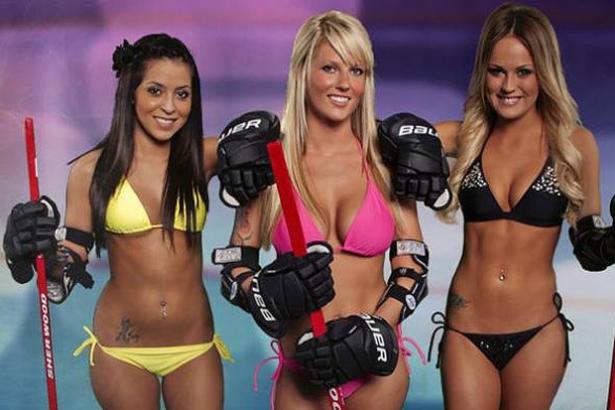 Last month, Canuck fans suffered a huge blow when the Vancouver hockey team was booted after the first round, but they may have another thing to watch.  Earlier this month, a press release for “Bikini Hockey” went viral and received 60,000 hits within the first four hours of its announcement.

Shocked by its popularity?

“I never dreamed in a million years that we would have this much interest in it,” confessed league owner Cary Eskridge.

Eskridge believes that Bikini Hockey will be nothing like the popular Lingerie Football League because “It’s a totally, completely different sport”.

Others agree. In a post titled, "Don't insult Bikini Hockey League with comparisons to Lingerie Football league", popular blogger Puck Daddy defended the honour of future Bikini Hockey players, claiming that the two sports are not at all alike (even though both feature hot, scantily-clad women for a mostly male audience).

"As for the Bikini Hockey League, it's not going to be a gaggle of model/actresses," he wrote, claiming that some players booked for the show actually have hockey backgrounds, such as Ashley Van Boxmeer, daughter of former NHL hockey player John Van Boxmeer, who won the Stanley Cup with the Montreal Canadiens and worked as assistant coach for the Los Angeles Kings. 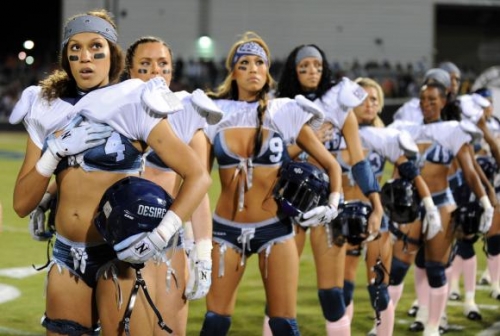 But the truth is, Lingerie Football and Bikini Hockey were both hatched by  men setting out to turn a (wet) dream into reality.

In 2009, commissioner of the Lingerie Football League (LFL), Mitchel Mortaza took the Super Bowl halftime alternative special, Lingerie Bowl and dreamed that it could be turned into a legitimate league.

Eskridge was concerned with the National Hockey League lockout in 2004 and dreamed of a solution for the gap in hockey entertainment.

Both Eskridge and Mortaza offered football and hockey fans an 'alternative' for entertainment in case something happens again to the NFL or NHL. The LFL and Bikini Hockey League look more like pornography at time than contact sports.  Just because they're  scoring  between poles instead of dancing on them doesn't mean these "sports" are so different from Vegas strip bars.

Let's talk about those uniforms: the LHL and Bikini Hockey require athletes to wear a helmet, elbow pads and knee pads. The LHL requires players to wear garters (and will now feature chokers as another unnecessary copmonent of the uniform). With this kind of uniform, it's even more disturbing that some of the bikini players -- as Puck Daddy pointed out -- actually have a background in hockey. Why should a woman have to run around on the field nearly naked in order to "professionally" play the sport she grew up with?

Mad men are mad for money

Organizers of the LFL are so frugal that the female athletes allegedly don't get paid.

There's a lot of ambiguity around the athlete's pay, with some sources suggesting that only travel is covered, or that it depends on how much they win/lose. Just one thing is guaranteed for the athletic beauty queens/models/aspiring actress and singers: precious media exposure to set them up as a famous something-or-others in the future.

The media has also criticized teams that save money for advertising by hiring unqualified coaches, cutting back on the amount of safety gear, and severely minimizing the budget for team uniforms.

But what about the problem of televising sexual violence?

Watching women in sexy lingerie beating other exposed women may be arousing for viewers but is that what we've come to in terms of women's sports?

MTV2 has been airing games since 2010, and now regularly broadcasts games every Friday night. Bikini Hockey is becoming just like the Lingerie Football League (as much as Eskridge may deny it). They plan to televise tryouts in the form of a reality show, with filming scheduled to begin next month.

Georges Méliès at Pacific Cinemathèque: A Trip to the Moon and The Extraordinary Voyage

The Dictator, Battleship, Marley, What to Expect When You’re Expecting, and three other films reviewed

Get creative this summer with Emily Carr Continuing Studies