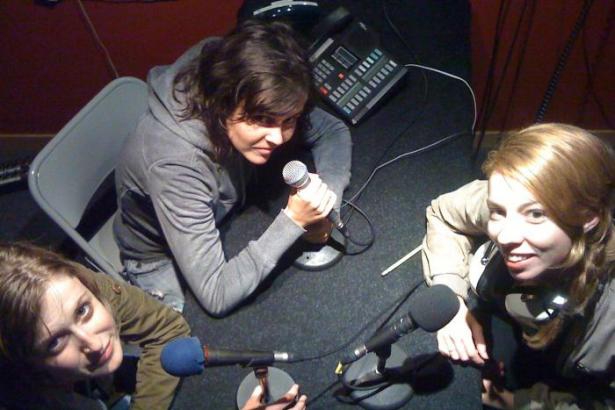 In 2006, co-founder Nicole Deagan traveled to Edmonton for a national feminism conference on feminism with a group of women from Capilano University. The group soon became friends, but was also brought together by a sense of isolation. The women felt that feminism itself had somehow become so disjointed that it was hard to find real points of connection within the community.

The sense of isolation lingered even after the group hosted a national conference on feminism, so Deagan set onto her next project to bring feminists together over the airwaves, rather than in conferences.

Drawing on a tongue-in-cheek reference to femnism, she co-founded The F Word radio show with Vancouver’s Cooperative Radio Station. Since 2007, Deagan and a team of radio hosts have been discussing current topics that affect the value of women in society such as Slutwalk and Bikini Hockey. In addition to the weekly radio show, The Meghan Murphy posts blogs on its website offering a more in-depth look into society’s marginalization of women.

VO: Bill C-38 was recently passed into law. What concerns you the most personally about the bill from a feminist perspective? Why?

ND: There are multiple problems with Bill C-38. Negative impacts on the environment, food safety, and workers' wages and rights will all be felt by women and their dependants - pushing a capitalist agenda necessarily leaves the most vulnerable suffering disproportionately.

Hard-won progress will be set aside through several of the proposed changes; but some sections are blatantly regressive, such as amendments to the Employment Equity Act which will effectively remove required protections for groups that have experienced discrimination. This includes women, Indigenous peoples, visible minorities and persons with disabilities.

VO: What can people expect to hear from The F Word radio show?

MM: We’ve done a lot of different things. We usually pick a topic or more, interview people with feminist perspective. Topics range from the media, to TV shows, current topics that can use a bit of feminist critique.

VO: Where to interviewees come from?
MM: All over the place! I’ve interviewed people from Australia, UK, Egypt, and lots of people from the U.S., Canada, tons from Vancouver of course.

The title “The F Word” is quite witty – it shows that Feminists can have a sense of humour too.  But why does it seem that feminism needs to be humanized in order to be taken seriously?

MM: That’s a side of feminism that doesn’t get a lot of exposure. We do like to joke around, even though it’s a serious endeavor. It’s pretty hard to counteract that impression that people have – that we don’t have any fun.

VO: You touched on this feeling of isolation – it seems to be an issue for women everywhere.

ND: There’s a lot of work that has to be done on forming coalitions with between women’s organizations, between feminists to work on specific issues instead of making so that we agree on everything. Within the feminist movement there’s a real tendency to be like, “here’s my position on issue”.

We have to line up on all four of those issues, or else, we’re going to fight against each other. And one of the things that I really wanted to promote on the show and through our organization of working together – we’re allowed to disagree.

Saving heritage in the DTES by playing with it