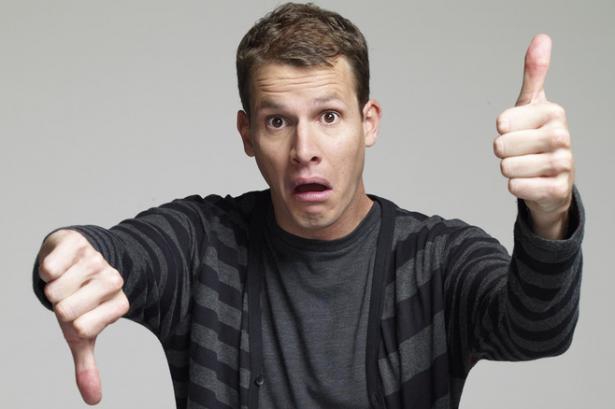 The blogosphere has been freaking out about Daniel Tosh inciting gang rape against a female member of his audience at a comedy club, as described in this Tumblr post. Tosh has made many rape jokes over the years, but this one, for a lot of people, has crossed the line.

According to the blog post, after the anonymous audience member called out, "Rape jokes are never funny," the Tosh.0 host allegedly said, "Wouldn’t it be funny if that girl got raped by like, five guys right now? Like right now? What if a bunch of guys just raped her…"

The audience member felt so violated, humiliated and afraid for her safety that she immediately left the confines of the theatre. Tosh has since "sincerely" apologized for the "out of context misquotes" (if they were misquotes why would he feel the need to "apologize" at all?) and called the audience member a heckler.

Daniel Tosh, everybody, an expert on damage control!

Obviously, it is horrible that a woman who went out for an evening expecting laughs, was instead served threats of gang rape. Given that in the US, almost one in five women have suffered sexual aggression, Tosh could very well have retraumatized a survivor—and I doubt he even considered that possibility.

But, to everyone currently in an uproar over the incident: Are you really that surprised?

Because this is a natural progression.

You can't watch TV without being subjected to a rape joke. You can't listen to the radio. You can't browse Twitter trending topics. You can't walk down the street without some jackass asking you, "Do I look like a rapist?" through his t-shirt. (And the answer is yes, yes you do.)

People use "rape" to describe how they were ripped off, or talk about "raping" the replay button on YouTube.

And you can't discuss any of these cultural artifacts without people painting the purveyors of this brand of comedy in a golden, harmless light, while erasing the experiences of millions upon millions of sexual assault survivors—most of whom never report their assaults for fear of not being taken seriously. Hmm, now how can that be?

Sadly, it isn't surprising at all that Tosh made a gag out of an innocent woman being sexually attacked by men, since this is the function of most rape humour.

They aren't really jokes about rape. Rape is the joke.

One thing I agree with Tosh about (just let me wash my mouth out now that I've said that) is that there are room for "awful things" in comedy. If you do it right. The best kind of comedy doesn't uphold the status quo—and rape culture is a large part of that status quo—it actually challenges it, and makes people think twice about things they normally take for granted.

In a recent scene from Louis CK's TV show, Louie, Melissa Leo's character coerces the title character into giving her oral sex. It's date rape, plain and simple. As they argue about it before it happens, Louie asks her, "Would you really want me to do that to you if I didn't want to do it?" Leo yells back, "I don't give a shit! I just want to get off!"

It's dialogue that we are so used to hearing, but from the opposite genders. This role reversal is an ingenious, eerie method of getting the audience to really examine—perhaps for the first time for some of them—what is so absurd, disturbing and problematic about that kind of situation between two supposedly rational adult beings.

It isn't oppressive, it's thought-provoking. What popular comedy should be.

This Change.org petiton to "Take Daniel Tosh off the air", born out of the Tumblr post controversy, already has 9000 signatures. I find that pretty funny myself.