The Winnebago Man is coming to Vancouver 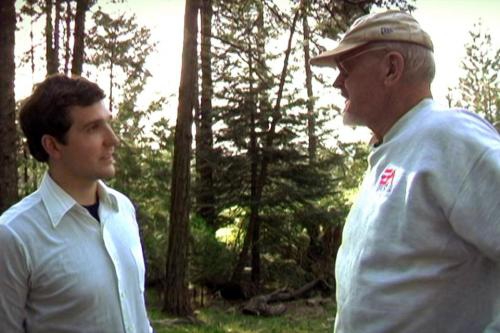 “WINNEBAGO MAN reveals the story of Jack Rebney, an unlikely folk hero whose outrageously funny outbursts were caught on tape during the making of a Winnebago sales video in 1988. Today, the “Winnebago Man” has been seen by more than twenty million people worldwide and is regarded as one of the first and funniest viral videos. WINNEBAGO MAN is a smart, funny and unexpectedly poignant tale of one man's response to unintended celebrity.”

We sat down with documentary filmmaker Ben Steinbauer to talk about his latest film and get some insight into his journey with this remarkable and timely film.

WD: How did you come to find your subject on the internet. What prompted you to look there?

Ben: I'd found out about Jack beforehand and went to the internet to find out more about him. I got a copy of the tape in 2001 and just immediately fell in love with it.

That was at a time when you couldn't get these types of clips readily. There was this underground tape trading network of friends that I had who would come up with this kind of material. They would find it through any number of ways. Somebody showed me the Winnebago Man clip and I just couldn't believe... it was so funny it felt like it was scripted.

I immediately asked for a copy and proceeded to show it to everybody I knew, who all asked for copies, and that's how this clip was spread around before video sharing sites like YouTube made it readily accessible. That was how it travelled from about 1988 until 2005.

I was a fan of the clip from 2001 and then around 2006, when I really got the idea to make a film about it, it was when the “star wars”  kid's parents were suing the parents of the kids who put his clip up on line.

This idea of unwanted celebrity or unintended notoriety was coming about and the term cyber bullying was invented and I thought, you know there's a chance that the star of my favourite video may not know that it exists and I wonder how he's going to react to being in this new loop hole, this strange technological anomaly that was created with this kind of video sharing technology. That was really it.

It sounds a little bit corny to say, but I really wanted to find him and show him that this was a clip that brought people a lot of joy and has certainly captured the imaginations of my friends and anyone I know who has seen it, and I wanted him not to be embarrassed with these out-takes but to take some small degree of pride in the fact that so many people related to them.

WD: What was the most challenging thing about making this particular film?

Ben: Everything about it was challenging in the sense that it was very organic. The way that you see the film unfold is how we filmed it, which is pretty different from most movies where you edit things out of order and shape a story.

This was very linear for the most part, so a lot of the time when you see me in the footage, either being kicked off the property by Jack or laying on the floor pulling my hair out worrying about what it is he's saying to me, the discoveries you see in the film were things I was going through in real time.

A lot of that was really difficult; not knowing where the story was going, not knowing how Jack was going to react to me at any given moment. Even now I still don't even know what he's going to say in any given situation.

He and I are really good friends. We talk on the phone just about every day and we've developed this camaraderie and a pretty good friendship as a result of this movie, but even after knowing him for two and a half years, I never know what's going to come out of his mouth.

I don't know if I could pinpoint the most difficult part. He's a very specific and difficult personality; the movie I had to fund on credit cards; I never knew what was going to happen when we were filming. There were a lot of complicated and sometimes frustrating things happening all at once.

I hope that's part of the fun in watching this movie, and I think that it is. People run up to Jack in particular, and me sometimes afterwards, and say, “We really did... ” as if they feel that they know us after having watched the movie, because I think to a certain extent that it is kind of being in our shoes for ninety minutes.

WD: Because you couldn't script anything, and it sounds like you had a very generalized idea you were going for, were you able to get any assistance in the way of funding?