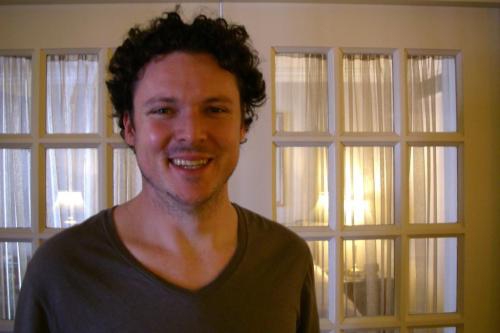 Alexander von Hofmann's latest film Tinglewood is a spine chilling thriller and will screen at VIFF as part of the shorts series High School Stories/Teenage Hell.
It is an engaging look at family dynamics, with a heart stopping twist that will keep you riveted.

Today I had the great pleasure of talking with the Australian director about his film.

WD: Can you tell me a little bit about your film background?

AvH: This is my second short film. They've both been funded through Screen West, which is a West Australian funding body. I've written and directed both of them and this one I've produced as well with a fellow filmmaker from back home.

This one is actually done quite well. The first one only went to a couple of festivals. This one 's at about 31 festivals now so far so it's doing well. Both have been in the horror genre and I'm probably going to continue down that road for a little while. I'd like to do other things as well. I've got some ideas that are more like family dramas and stuff like that as well.

WD: Where did the idea for Tinglewood come from?

AvH: When I was a kid I stayed in the Tinglewood forest and that place is creepy. It gave me a whole bunch of dreams about things that could go wrong and they kind of stuck with me.

Originally the idea was: what if there was a family camping in the woods and things really did come out of the trees and attack them, what would they do. And then I was playing with: what would happen if all of them except for one person died: what would happen if all but two died. I kind of messed around with those ideas for a while and then when I pitched the idea to the other filmmaker that was working on it with me, Antony Webb, we started talking about action sequences and cars getting flipped and all sorts of things, which ended up in the film, and it kind of just evolved from there.

WD: What was the most challenging thing about making the film?

AvH: The safety aspects were big in terms of the producing side of it: just to get the funding in the first place. They had to explain to people that if you flip the car upside down you can still put people inside the car and they're not going to get crushed.

For me, I had worried about directing children, especially when they have to be terrified: in fifty percent of the film they have to be running and fighting for their lives, so that was a worry for me. Also, because there's CG(computer graphics) in there, getting the children to react to things that aren't there was trouble as well. I think it worked out pretty well.

WD: Yes, I was going to ask you about working with that little girl (Paris Graham). She was awesome.

AvH: That was the biggest challenge because she had never acted before: that was her first film. We actually auditioned her dad for the father role and he just brought her along. She thought she'd try out for the daughter role as well and I ended up saying sorry to the dad but we'll have your daughter if that's ok (laughs) because she's fantastic. She has this natural quality that comes through.

But late at night, because they were night shoots, she was wanting to fall asleep and she would get distracted and we'd have to get her back on point again. It was good though.

We had some concerns that she would be scarred in some way: that's what some of the funding people were saying. I think she understood that it was all make believe.