Mokhtar, an awesome little Canadian film based in Morocco 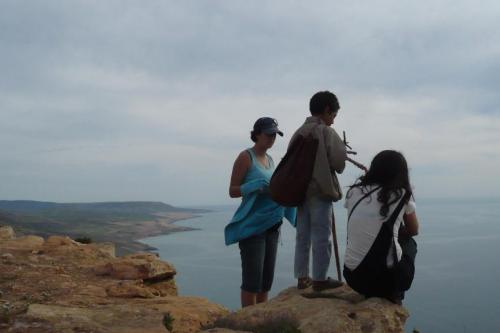 Director Halima Ouardiri talks to us about her intriguing film Mokhtar: a beautiful film wrapped in tradition and superstition, and based on a true story.

WD: Can you tell us about the origins of this film?

HO: When I travel to Morocco I like to listen to the people's stories: people I meet by chance or families I've stayed with. In this case I was staying with a middle class family from Casablanca, and their handyman told me a story of Mokhtar: it was his own story, based on his own experience finding a baby owl and bringing it back home to his uncle and having to deal with his uncle's fear and superstition.

At the time, when this man was a child, he was living in the region where I shot the film, and worked with the native people of Morocco.

WD: Why did this story in particular resonate with you?

HO: That's a good question. I became very sensitive to superstition and beliefs that exist. I don't believe only what I see. Actually, I don't know. That's the whole thing. Being told that bad and good angels exist as a kid makes me not know what to believe still today.

The punishment that the child receives in the film for doing something that wasn't allowed in his culture and his family, I'm very sensitive to that as well. In this part of the world children always get punished way too strongly for what they do, with a lot of violence. This also existed within my family.

WD: What were some of the biggest challenges about making this film?

HQ: The biggest challenge was to find a partner in Morocco, in order to have access to the industry. It was difficult to find the right partner and be able to trust him because there are very different types of production companies there.

What I wanted was to be able to stay small in my production: have people with good skills and versatility in cinema and being able to do more than one thing. A small and effective crew able to stay close to the people: more like a documentary crew.

In Morocco the industry is very “Hollywood.” People from the States are going there with big suitcases full of money to pay the crew cash at the end of the shoot, so it was difficult to find people who really wanted to make an art film with me.

WD: Was there anything that surprised you along the way?

HQ: When I finally found the right people to work with I realized they were extremely passionate about cinema in Morocco. I was very surprised to see how well we worked together. I'm half Moroccan on my father's side, but I never grew up there: I only visited. So I'm from a different culture from the rest.

We are mainly a crew of women, so working with a male crew from Morocco, I was extremely surprised how well it went, both on a personal level and on a professional level.

Also, the hospitality and willingness to work, of the three non-professional actors was great: they were giving everything, without any conditions.

WD:  What has the response been so far?

HQ: The world premiere was at TIFF was very good: people were very engaged in the story. There were many questions about how this movie was made. They didn't really know what they were looking at: was it fiction-documentary. They understood it was fiction but they had so many questions that were usually geared towards a documentary.

There were some great questions. There was a seven year old child who had acted in another film, who asked me a lot of questions about the animals in the film. He asked, "Are the animals real in your film?" Yes they are.

WD: What can we look forward to seeing from you in the future?

HQ: I'm always inspired by true stories. I'm writing a script for a feature film about an experience of my own. I had a very unique job for two summers in a row: I was body guard for visiting Saudi princesses.

It was all happening in Geneva at the time, which is where I was born. I later moved to Montreal and I think Canada is great!!

Mokhtar is screening as part of the short series, Acquired Traits.
check www.viff.com for times and tickets.