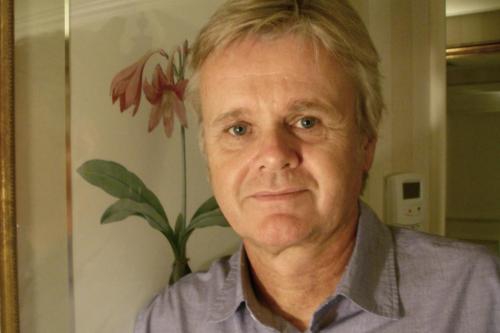 Sturla Gunnarsson in a photo by Wendy Dallian

Director Sturla Gunnarsson gave me a behind the scenes look at his new documentary Force of Nature: the David Suzuki Movie.

Force of Nature chronicles the major turning points in the life of one of Canada's leading scientists and environmentalist, David Suzuki, and how these events influenced and shaped his course of direction.

WD: How did you choose this topic for your film?

SG: I was introduced to David (Suzuki) by Laszlo Barna, the executive producer of the film. Laszlo is an old friend who wanted to make a film with David. He didn't know what, just that he wanted to do something with David, so he asked me to come for the meeting.

I didn't know David but you know those under-grads in the archival footage, I could have been one of them: I was an under-grad at UBC when David was this rock star professor. Even though I was studying English Lit. and was reading romantic poets and David was talking about genetics, he might as well have been talking poetry: he was talking my language way back then.

He was always kind of a folk hero, but I didn't know him, I'd never met him, and thirty years had passed. I didn't really know what I could do with David Suzuki that hadn't been done: it's not like he's under exposed. I wanted to meet him because I'd always looked up to him and so we started talking.

We had a lot in common: we're both BC boys; we've both experienced the sense of the numinous under the British Columbia sky, and it changes you; we both like to fish.

David was on fire when I met him because on the one hand he was criss-crossing the country trying to get the message out: he had this tremendous sense of urgency. I think it was partly because he had a grandson that was about to be born and so this need to make people “get it.”

At the same time he was at this very reflective moment in his life: he was contemplating his own mortality and taking stock and wondering what his life was all about.

I found the tension between those two ideas very compelling. At the outset we started off talking about big metaphysical ideas: David wanted to make a film about the history of time, the birth of the universe and all that kind of thing which we had a lot of fun talking about and I found very stimulating.

But what I kept gravitating towards was him as a human being and I realized that nobody had actually done that. For the hundreds of hours of David Suzuki audio visual content, nobody had ever treated him as the subject of a film, so that's what excited me. That was the birth of the idea for me so that's what I proposed to David and Laszlo: that we do something where David is the subject of the film.

I think David was quite skeptical at first. Firstly, I don't think he understood exactly what I was proposing and secondly, I think he's uncomfortable being the subject as opposed to the interpreter.

In the beginning when I'd ask him questions he'd turn to the camera to answer, you know, “the host.” And so the first little bit of shooting felt like The Nature of Things.

Eventually we built up trust and at a certain point I realize we were on track. After we hiked the mountain in Slocan, that was a real turning point. It was a three day intense hike and we got to a place of respect and it all kind of unfolded from there.

WD: What were some of the challenges you faced making this film?

SG: My great concern going in was could I get beyond “franchise Suzuki”, which I respect, but... When I was with David one on one there was another person there that I had never seen before, and I thought  “would it be possible to capture that person on film.” The was a more intimate human being there.

The first big challenge was getting to that place of being able to make a very intimate film with somebody like David.

The other challenges were just work. I felt like in order to make a film like this, you have to have an active present tense and I didn't see it as being a purely cinema verite film because there wasn't anything happening at that moment that was dramatic enough to provide it with that engine.

So I thought well David is such a great speaker let's build it around a lecture. I'd filmed some lectures with him but usually you're in a Chamber of Conference hall and you can't make it look like anything: it is what it is. All you've got is a great performance but you don't have anything to look at. So I thought, let's create an event that we can anchor the film in.

When I called David, the first thing that came out of his mouth was “let's make it a last lecture.” He said that universities do that when a professor is nearing retirement: sort of if you had one last thing to say what would it be. He said, “this will be my last lecture. It'll be my legacy: what I want to say before I die.”

I thought that was great so we started working towards that but I put it at the very end of the schedule so that we spent nine months before the lecture going to all these key places: Japan, Slocan, Haida Gwaii, both to film places which were meaningful turning points in the evolution of his body of thought.

Over the course of the nine months there must have been thirty iterations of the lecture and he would give it to me and I would act as an editor: I would edit and he would go back and forth so that in the end the lecture was something that by the time the lecture happened I already knew what the biographical pieces were and I knew where they'd live in the lecture and so I was able to ensure that the lecture had the right segways in and out of it.