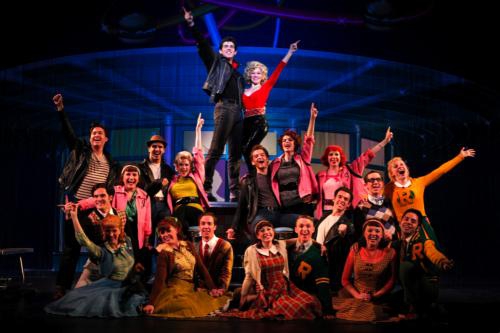 Matt Nolan (centre) as Danny and Alyssa Herrera as Sandy, and the company of Grease, perform the finale of Grease.

WD: Can you start by telling us about the show?

DO: I'd been working on Grease back in 2007 as a production/stage manager for the Broadway company and from that we moved on to a national touring company that changed quite a bit from the Broadway company. Hopefully, what we feel, we've made improvements with this company.

We were really excited when we opened in Denver with the calibre of people that we have. That part has been thrilling.

I've worked directly with the author Jim Jacobs who was in Denver with us. We went through what his intentions were originally and how they pertain to today and how they sometimes have to be changed for today.

WD: Can to tell us about some of the differences between the original show and the one we'll see today?

DO: The original Grease was a smaller production. Even on broadway where it ran for so many years, it was on a much smaller scale for what we consider broadway now.

It was a little show that was about the 50s and I think that they started it out as something to have fun with and it turned out to be something bigger than expected, because subsequent productions have become bigger and have tried to be more creative. It was never really the intention of the show itself to get too big.

Of course, the genesis of the show going to the movie and all the subsequent productions, that's really what everyone remembers. In our production we've added songs from the movie: Hopelessly Devoted to You, Sandy, You're the One That I Want, and Grease is the Word.

This is interesting because they're of mix of 70s as well as 50s. So the music is very pop-like as opposed to the rock and roll feel of the 50s.

WD: What were some of the challenges of directing this show?

DO: I ended up putting some of the original material back in to the show. One of the challenges was giving a 50s flavour to it. Many people who come to the show, and I hope I don't insult anyone by saying this, are grandparents who grew up in the 50s and actually remember this. For everyone else it's a bit of a history lesson.

WD: Where did you find your key cast members?

DO: Everyone auditioned in New York. We had a wonderful casting director Dave Clemmons who found us these wonderful people. He actually goes throughout the United States and finds young kids at colleges, kids graduating, and finds people he thinks are appropriate and invites them to audition.

Usually the kids will come on their own to New York and audition for us there. We also did a call in Los Angeles, which is where a few of our ensemble came from and one principle, but everybody else came to us through the New York auditions.

The gentleman who plays Danny (Matt Nolan) I've actually known for a while because he was part of the reality series (You're the One That I Want) in the USA that was casting for the broadway production in 2007. He was one of the Dannys in that reality show.

WD: Do you have any surprises for the audience with this show?

DO: One of the things I feel very confident in saying is that it is a pretty true representation of the show Grease. We took some things from the movie.

We also have Eddie Mekka who was on the TV show Laverne and Shirley (he played Carmine) which also was set in the 50s. He plays Vince Fontaine in our production. Often times people ask, “can he sing?” and I think the surprise is that yes, he can sing really well.

WD: Can you tell us where you had the most fun?

DO: In recreating there was always a song that I loved, because it was a rebellious fun song, that the Greasers sing that's a take off on the alma mater from Rydell High and we've put that back into the show. We really had fun doing that. It's kind of a simple number but everybody had fun doing it.

WD: What's the response been so far?

DO: The response has been great. One thing I'm really proud of is that the choreographer (Joyce Chittick) and I re-conceived the opening of the show. I won't actually spoil it by telling you but it's a very cool look: the Outsiders and the Lost Boys, and it has a different feel than you would normally see in Grease.

We're looking forward to the shows in Vancouver. We love Vancouver. I've toured on a number of shows and for us, from the States, Vancouver is one of our favourite places.