Heart of a Dragon 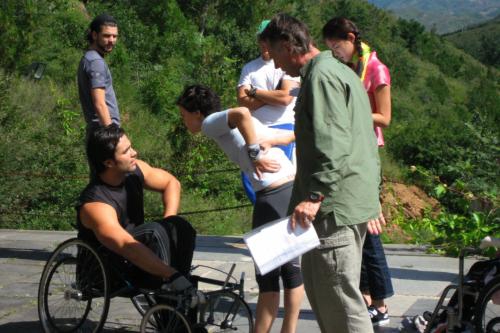 Director Michael French (paper in hand) in China with the cast of Heart of a Dragon.

Director Michael French talks about his new film, Heart of a Dragon.

WD: What led you to make this particular film?

MF: In 1986 when Rick (Hansen) was on the Great Wall of China I produced The Vancouver Show in Vancouver and I worked for Darryl Duke who is a pioneer in television and the movie business in both Canada and the US. Darryl was working on a film in China. As a producer working for him, I heard about China a great deal, constantly, and the trials and tribulations of making a film there.

Rick was going around the world and had arrived in China and The Vancouver Show followed his progress. We heard that there were about a million people in the streets waiting for him when he arrived. The day I heard that I went to Darryl and said, “listen, I've had a great three years running this show for you but I'm on a plane tonight.” He asked me what I was doing and I told him I was going to shoot a documentary of Rick Hansen climbing the Great Wall of China. He said, “Go. I'll take you to the airport. That sounds exciting!”

I got some pals who worked at different television stations and various companies, and we all got the necessary cameras and equipment. We all literally jumped on a plane, shot the documentary of Rick surrounded by millions of people, then essentially alone on the road, then making the climb up the Great Wall.

We shot that documentary all those years ago and it was on television and in theatres as he was coming back across the country a year later. It was very popular: translated into Chinese and French etc. And the VHS version of that proved to be enormously successful and raised a lot of dough for Rick and his Man in Motion tour.

Rick had asked me if I'd be interested in working on a movie version of that over the years and my answer was always, “No. Thank you very much.” It was a story of remarkable responsibility and privilege to tell it but I had made films before and I knew how long these things could take.

Unknown to me, when Rick arrived back in Vancouver a great American filmmaker named Sherry Lansing subsequently became the chairman of Paramount. She had seen the documentary I had made and took the rights when Rick came home, believing it would be a good movie to make.

Independent of Sherry, again totally unknown to me, composer David Foster had dedicated a song to Rick called Man in Motion.

David was working on a movie in Vancouver and managed to convince the producer of that film to shut production down for the day. David, with his own kind of ambition, hired many of the crew members from that movie set and rented as many 35mm cameras as he could get his hands on, as well as helicopters and other things, and shot Rick Hansen returning to Vancouver. He locked that film away in a vault for twenty years.

On the one hand I made the documentary, on the other hand Sherry Lansing took the rights out, and then finally David Foster did his own thing and we never really knew about each other.

Sherry, years later in the late 1990s, had become the chairman of Paramount. At that time I was making a lot of comedy specials with Jim Carrey and Brent Butt and Will Farrell and she called me into a meeting along with a man named Mark Gordon (Saving Private Ryan) and told us she was hiring us to make the Rick Hansen movie.

What a delightful problem to have (laughs). We took a couple of years to develop the story with Paramount. We got a couple of scripts and it became pretty obvious to us, because we knew Rick and really appreciated what he did, that the grand vision of the movie that Hollywood would make was just not the story we thought ought to be told because we didn't think that that represented what Rick's tour was really about.

We didn't think that the story that we knew, in terms of the dedication that Rick and others had in terms of trying to change the world, was reflected in the Hollywood telling of the story. We decided collectively to take the movie home because we could make this movie at home, and while it would be smaller in its attendance, it would be reflective of the story that we as Canadians needed to know.

The documentary told the story of what happened but it never, by the very nature of it, told you how it happened.

With that notion I returned to Vancouver and it tool us ten years (laughs).

WD: Can you tell us about the casting?

MF: In making the film, because we understood that the story was about people coming together as friends to do something impossible, we knew that it had to be based on an ensemble cast and their time together on the road needed to be the story of a family.

Our story finds them in China once they've been on the road for more than a year. They've committed every bit of themselves physically, emotionally, and mentally in every way so we felt this group very much needed to be a family: to stay together that amount of time on the road and to share the same ambitions, and to love each other in many ways.