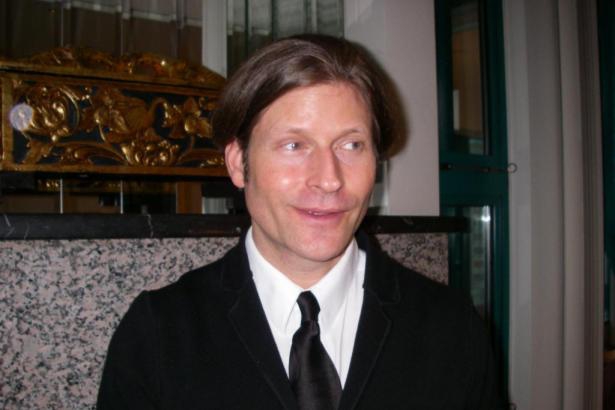 Multitalented actor, director, writer, Crispin Glover (River's Edge, Back to the Future, The Doors, The People vs Larry Flynt, Hot Tub Time Machine, Charlie's Angels) will be at the Pacific Cinematheque for three evenings Jan 14, 15, and 16 with his second feature film It is Fine! EVERYTHING IS FINE.

Today as I sat in the hotel lobby waiting for my interview with Crispin Glover I thought about all the films I'd seen him in over the years. I'd been a big fan since River's Edge and was a little nervous about meeting him in person. I had no idea what to expect.
Sure, I'd heard a number of stories over the years, the usual celebrity slam, but I've always preferred to come to my own conclusions about people.


WD: Can you tell us a little about your show?

I had taken old books from the 1800s and reworked them and turned them into different books from what they originally were and heavily illustrated them. When I started publishing the books in 1988 people would tell me I should have a book reading, but because the books are so heavily illustrated it made sense to have the illustrations projected behind me. Ever since I performed it it's gone very well.

There's a small film festival in Olympia Washington that had a retrospect of the work I'd done up to that point and they brought me up there. I thought, oh this will be the right time to perform Slide Show and it went very well and I've been performing it off and on ever since. I realized it was a good way to self distribute my films.

The first film, What is it?, which I premiered at Sundance (Film Festival) in 2005 and have been touring with since that time, is my reaction to the constraints that have happened within the corporate film funding and distribution industry. Where in anything that can possibly make an audience member uncomfortable, will necessarily be excised or that film will not be corporately funded or distributed.

I think that's a really damaging thing because it's that moment when an audience member sits back in their chair and looks up at the screen and thinks, “is this right what I'm watching? Is this wrong what I'm watching? Should I be here? Should the filmmaker have done this? What is it?”

What is it? That's the name of the film. What is it that is taboo in culture? What does it mean when the taboo has been corporately excised. It's damaging because when people are asking questions there's a genuine education going on. To have a lack of questions being asked is the opposite of education: perhaps, and I don't like to stress it too much, propaganda. I think more or less, that's what's happening in corporate media at large.