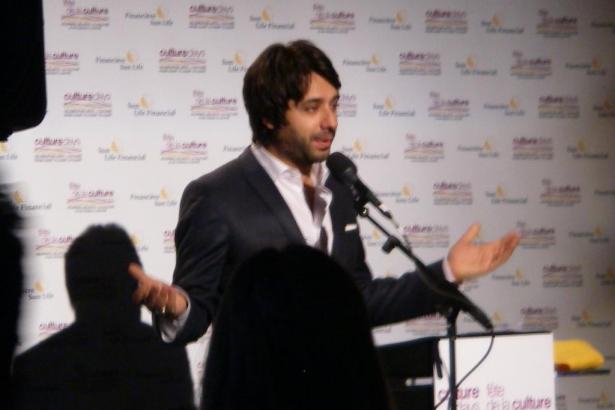 Culture Days unveiled plans for the 2nd Annual Canada-wide grassroots celebration of Arts and Culture: the largest-ever public participation campaign undertaken by the arts and cultural community in Canada.

Culture Days is a free annual event weekend where the public is invited to celebrate arts and culture in cities and towns in every province and territory in Canada. It calls on all artists, arts and culture organizations, community groups and members of the arts and culture industries, municipalities, libraries, schools, businesses and arts and culture lovers in across the country to offer behind-the-scenes, hands-on and interactive experiences, completely free of charge.

Emcee and Host of CBC Radio's Q, Jian Ghomeshi was on hand to answer a few questions about the upcoming September event.

WD: What was the original inspiration for this event?

JG: The idea for Cultural Days first took root in Quebec and was done really successfully for about a decade. In Quebec, there's a very strong tradition of culture and arts and community involvement in and around that, with Art institutions and support for them.

Culture Days has become a real outpouring of celebration for culture in Quebec so the idea was “can this be taken across the country.” Alberta had done it somewhat successfully once as well a couple of years ago.

Last year was the inaugural year which was an experiment to a certain extent to see how it would go and what would happen. I'd say it was an unqualified success.

I think it's going to grow into its own. But with 4,500 events happening across the country last year and seven hundred towns and cities involved, it was "mission accomplished" in terms of the first year putting into work something that we really hadn't had before: a national exercise of celebrating and exploring arts and culture in what I consider a really artistic country.

WD: What kind of artists are they showcasing?

JG: It's everything from indy graffiti artists to more national institutions getting involved. For example, the National Ballet opened its doors so people could get ballet lessons for free over the course of Cultural Days. In Ottawa they were teaching people to walk on stilts. All across the country there were artists showing their works.

The idea is that it's volunteer and it's free. There aren't any parameters placed around who and what an artist is. It's about exploring your own culture: everybody getting out and doing their own thing.

The upshot of it is walking away going, “this is a really big part of our common experience.”

Last year there was a survey that showed that about two thirds of the people who had some experience with Culture Days had a more positive and confident idea of arts and culture in Canada.

WD: How did you get involved with Culture Days?

JG: I was asked and was happy to get involved. One of my gigs is to host an arts and culture show, Q, and I was a touring musician for 10 years and have this great pride when I travel the world and Canada. Not just around the stereotypes we ascribe to like healthcare, being polite and loving hockey but what's come out of this country culturally.

I think that our artists, from big to small, define who we are so if I can play a role and Culture Days can play a role in expanding the awareness and the tradition around that then great.

WD: Do you think events like this will have an effect on the government's attitude towards funding the arts in the future?

JG: I tend to think that any popular expression of anything in the country where it's clear that people are involved and Canadians care, will have an effect on government. So yes. In the same way that Hockey Day in Canada probably underscores that that's part of our brand and part of our tradition. I think that that's true of this too.

WD: Where are you finding the most support?

JG: It's interesting because it really did run the gamut. Where you see a lot of the action is in small towns. I loved hearing about Flin Flon Manitoba. They had people on the street and in a flash mob dancing to "Waving Flag" by K'NAAN.

That's something you might see in Toronto or Montreal but when it's the majority of a community getting out and doing something like that it's really cool.

Peter Mansbridge in town to support the Vancouver Food Bank