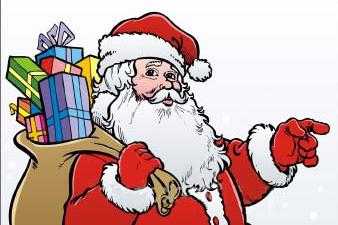 If you’re planning to do your holiday shopping online this year, good for you. But here are a few things to keep in mind.

First of all, be careful if you’re shopping from work. Although “Bing is beautiful for shopping from the privacy of your own office,” according to a current Microsoft advertisement, your employer might not agree. Many offices have strict rules regarding personal use of company computers and internet connections. If in doubt, ask your boss before shopping online from work, even during your own time. It's the company's computer and internet connection, after all.

Secondly, caveat emptor (buyer beware) is especially important on the internet. It’s difficult for fly-by-night scammers to pretend to be upscale merchants in real life, but anyone can create a slick website in a few hours. If a bargain seems too good to be true, it probably is. And if buying online from an unfamiliar vendor, do some research beforehand.

Need convincing? Then check out Clarabelle Rodriguez’s experiences as related in the New York Times this weekend (“A Bully Finds a Pulpit on the Web.” Rodriguez bought a pair of glasses after doing a Google search. She’d never heard of the vendor before but it had “a Web site that looked snazzy and stood at the top of the search results.” Several months later, after going through what she described as “one of the most maddening and miserable experiences of her life,” she knows better than to go for the easy bargain.

It’s not only a lesson in caveat emptor, it’s a lesson in why Google (and Bing, and Yahoo) search results should be viewed carefully. The vendor who sold her the glasses achieved his “top of the charts” listing through customer complaints. It’s simple: he provides shoddy service, the customer complains about it online and his website creeps up in Google’s algorithms because of that complaint.

According to the Times, “It’s all part of a sales strategy, he (the owner of the decormyeyes.com website) said. Online chatter about DecorMyEyes, even furious online chatter, pushed the site higher in Google search results, which led to greater sales. He closed with a sardonic expression of gratitude: "I never had the amount of traffic I have now since my 1st complaint. I am in heaven."

As the Times warns, “The story of DecorMyEyes suggests that 15 years after the birth of online commerce, the Internet is still strewn with trap doors, and that when consumers take a tumble, they are pretty much on their own.”

So, if in doubt, check with the Better Business Bureau. Other resources include the federal government's anti-fraud centre and U.S.-based Get Satisfaction.

A Filipino Christmas is filled with rich traditions, some of which might come as a surprise.
Patricia LimDec 19th, 2011

Make your holiday a healthy one with a little planning, creativity and the following tips.
Sheila BlacklockDec 16th, 2010
Speak up about this article on Facebook or Twitter. Do this by liking Vancouver Observer on Facebook or following us @Vanobserver on Twitter. We'd love to hear from you.