Family. Faith. Shopping. Eating. It's not surprising that Filipinos view Christmas as one of the biggest events of the year, probably even more so than your average North American. Traditionally, the Christmas season in the Philippines begins on December 16 with a series of dawn and night masses (known as Misa de Gallo).

When I lived as a child in Manila -- the bustling, traffic jam-filled, wonderfully chaotic capital of the Philippines --  I would always remember hearing George Michael's "Last Christmas" in the malls starting in September. Shopping malls would begin putting up gigantic Christmas trees, Christmas lights, and hang Christmas ornaments as well as flying sleighs, reindeers and Santas from the ceiling. And on the street lamps, outside people's homes, even in office lobbies, I would see parols, those uniquely Filipino Christmas lanterns with elaborate shapes, glowing from within.

On the night before Christmas, many Filipinos attend midnight mass at their local parish, then go home and spend time with family for a noche buena (Christmas Eve) feast. Maria Olaguera, a Filipino-Canadian who moved to Canada in 1992, remembers eating ensaymada (sweet cheese bread) and queso de bola (the ubiquitous ball of Edam cheese covered in red wax) as part of her family's feast. After the meal, she and her family would open gifts. Even though our family didn't go to mass, I, too, would gorge myself on ham, lechon (roast pig), and bibingka (rice cake), always opening presents after midnight (which, upon reflection, is probably the reason why I never believed in Santa Claus).

The next morning on Christmas Day, Filipinos spend the day visiting extended family, where there would be more food and more presents. Maria particularly remembers viewing her grand-aunt's super-elaborate nativity scene, which took up half her living room and included a desert, a castle on a hill, and a town.

For many Filipinos, Christmas is also a time to reunite with balikbayan, or friends or family who have been working overseas -- about one in 10 Filipinos work abroad. One of the persistent memories I have of returning to the Philippines for Christmas is the clapping, shouts of joy, and in some cases, even tears from fellow passengers when the plane finally touched down on the tarmac. Balikbayan are also expected to bring pasalubong, or homecoming gifts, which often means lugging back huge cardboard boxes (which have become known as "balikbayan boxes") stuffed with clothes, electronics, toys, and other gifts from abroad.

Christmas for Filipinos living in Canada may be a little quieter and less hectic, but traditions still persist. For Maria, much of her family is spread across Canada and the States or are still in the Philippines, but she attends midnight mass at St. Mary's Church on Joyce Street with her brothers and celebrates noche buena. She also hangs a parol in her home, which was brought over from the Philippines.

For myself, Philippine Christmas traditions are memories from my childhood. The only tradition I've kept is opening my presents at midnight, while my parol has gone missing.

However, there are several Vancouver neighbourhoods with a strong Filipino Canadian presence. Pockets of Filipino Canadian communities regularly come together for Christmas, celebrating with Misa de Gallo, caroling, and -- as always -- lots of eating. If you walk down Vancouver's Fraser Street or Joyce Street, brightly-coloured parols will be hanging in the doorways of stores and restaurants.

Make your holiday a healthy one with a little planning, creativity and the following tips.
Sheila BlacklockDec 16th, 2010 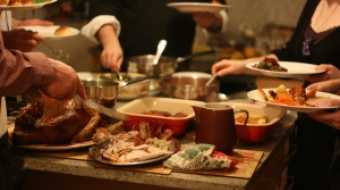 How to cut down on food waste this Christmas

Helpful tips for Vancouverites to reduce food waste this Christmas, so you can eat, drink and be merry (and be green).
Alexis StoymenoffDec 22nd, 2011
Speak up about this article on Facebook or Twitter. Do this by liking Vancouver Observer on Facebook or following us @Vanobserver on Twitter. We'd love to hear from you.