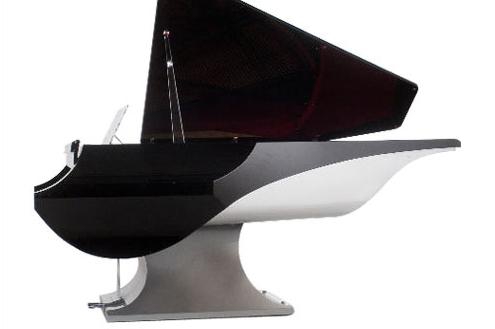 Try this on for size: the Fazioli M-Liminal is both space-saving and harmonically clutter-free.

Ever since I was a young boy, I regarded Italian design to be some of the most elegant, well-considered manifestations of human ideas. From Da Vinci's Classical artwork and inventions to the more modern Ferrari F50, there has always been something special about the stamp 'Italian-made.' So after the initial shock set in after entering Showcase Pianos on Broadway, I guess you could say I was not surprised that the most beautiful piano I have ever seen was made by a man from Rome. After earning university degrees in engineering and subsequently piano performance, Paolo Fazioli embraced what he learned and applied his knowledge with the help of scientists and technologists to create a new, conceptually unique line of pianos.

Resembling the profile of an ocean wave, the case of the Fazioli M-Liminal, designed by architect Philippe Gendre of NYT Line in France almost looks more like a speedboat than a piano. I definitely did not expect to see such an instrument next door to a nail salon. I spoke with the polite store owner Manuel Bernaschek and asked him if I could give it a whirl. Without hesitation, I gained permission. The only words resonating in my mind after hearing a D chord were "crystal clear". How could any mechanical device be so refined and focused yet sturdy? I continued playing and felt I could not do any wrong. Like a condenser microphone which is sometimes used to warm up a dull voice, the piano seemed to speak for me. For nearly half a million dollars, I would hope so! Wayne's World conclusion: "One day she will be mine--Oh yes, she will be mine."