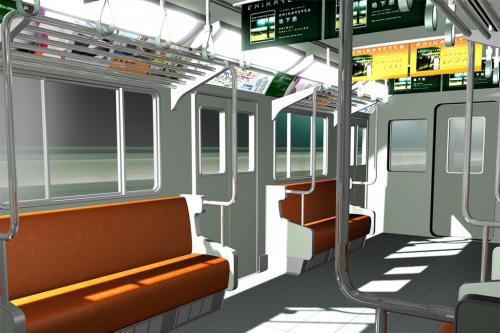 Tim Gerwing imagines himself floating through the cars of Japan's Chikatetsu.

Did you know there is a gorgeous sanctuary of an art gallery on the second floor of Tinseltown?

It's called Lumen and it is owned by a kind man named Emmanuel St. Juste. When I arrived to Tim Gerwing's album release on January 16th, the space was packed with people emitting a bright sense of vigour.

The lights were out and glitchy music was pumping. Once I gained my equilibrium I realized how much technology was in the room: Multiple laptops, high quality monitors on industrial cinder blocks, at least four mixers, electronic drum pads and several midi controllers including a Korg were stationed around the room.

Dark images reminding me of a female heroine such as Elektra covered the wall behind where the performers were about to take stand.

The opening act was Dan Kearley. As I was solely in attendance to hear Tim's work I was skeptical of Dan, but my cynicism was unwarrented because his set blew me away! I actually got chills from some of his work which resembled drum 'n' bass. I thought to myself, "This is the kind of stuff that really makes me appreciate the complexity of life." Click this link and close your eyes: http://www.kearley.ca. Let the music run in the background. Magic.

The headliner, Tim Gerwing took his place after a short intermission and our enjoyment of Japanese catering by Aya's Kitchen (to keep with the theme of the night). Chikatetsu "underground iron" is Japan's subway system and also the title of Tim's third and most recent album (http://www.lascaux21.com/chikatetsu.) Tim spent nearly 15 years in Japan, returning to Canada in 2005. Hearing live acoustic ride cymbals and electronic drum pads played by David Picking with Dan Kearly behind Tim's arsenal of synthesizers, voice manipulation technology and a strange motion-sensing tone modulator was a one of a kind experience. Video art by Mark Nezemi projected high on the wall further mesmerized the crowd.

I got the chance to interview Tim after the show. He talked his experiences in the Chikatetsu and how it could sometimes be filled nose-to-nose with people, yet Tim could feel like it was the most private time in his day. He imagines floating through its cars like a phantom. The music of Chikatetsu is what he heard.