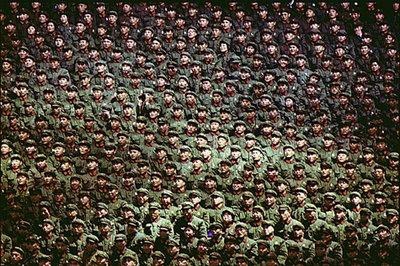 The Vancouver Opera's performance of 'Nixon in China' takes creative liberties that pay off.

The production starts with 800 individual video loops of citizens' faces filling the screen that drapes the large proscenium arch. Computer-generated imagery and video projections are tastefully utilized throughout the opera.

Composer John Adams' score is notably minimalist. Pulsing and persistent, the music morphs into different time signatures and keys. The program guidebook defines Adams' style as "a kind of 80's pop which leans heavily on the use of synthesizer". The music is reminiscent of Romanian gypsy folk with more chord changes in a bar than I could count. American Big Band Era music frequently appears and just as suddenly shifts into a variety of battle themes. The libretto, by Alice Goodman, makes many allusions to nature while effectively balancing metre and rhyme.

The subject matter of 'Nixon in China' varies from Chinese philosophy to the differences between Chinese and American politics, to the significance of historical advancements in telecommunication.

ChenYe Yuan plays Chou En-lai, singing opera in English with a Chinese accent. This adds to the authenticity of the work. Tracy Dahl as Chiang Ch'ing, Madame Mao Tse-tung, has a glorious voice. Fei Guo is one of the most graceful dancers I have ever seen and Robert Orth creates a very convincing Richard Nixon.

There one performance still remaining of 'Nixon in China' on March 20th. The show begins at 7:30 PM.

Founded in 1958, the Vancouver Opera is a “resident professional opera company” that supports up and coming artists in Opera and performs for millions of school children across British Columbia.

One of the Vancouver Opera’s main goals is directed towards cross-cultural partnerships within the creative community. Recently the Opera has worked closely with the First Nations people to create representative costumes and designs as well as to increase the authenticity of their characters and storylines.

With their endless creative capacity, the Vancouver Opera has been showcasing both traditional and highly innovative shows for decades. Their current and upcoming performances this year include  'Marriage of Figaro,' 'Madama Butterfly,' and of course, 'Nixon in China.'