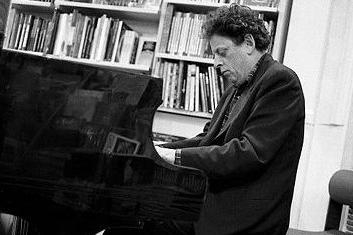 The last time composer Philip Glass played the Chan Centre for Performing Arts at UBC was in 2004. Glass, still composing and performing at age 73, says: "Why stop now?"

Glass began his April 5th, 2010 performance with 'Four Metamorphoses' conjured from both Errol Morris' film 'A Thin Blue Line' and a staging of Franz Kafka's short story 'The Metamorphosis', in which the lead character wakes up one day to find he has evolved into a giant vermin. Glass' ostinatos (repeating melodies or patterned phrases) create the foundation for chilling chord changes. His rapid, articulate arpeggios (flowing broken chords) seem like second nature.

Philip Glass first entered my conscious mind after I discovered he scored the 1982 "documentary without words", 'Koyaanisqatsi'. I had previously seen 'The Truman Show' starring Jim Carrey but did not question the soundtrack as it fit so well with the picture (something every film composer strives to achieve). However, Glass worked on that film too...and 'The Hours'...and 'The Illusionist'. Glass won a Golden Globe for his work on 'The Truman Show' and his score for 'The Hours' was nominated for a Golden Globe, Grammy and an Academy Award, also receiving a British Academy of Film and Television Arts Award.

The first thing I noticed upon taking my seat was how stunningly close many of us were sitting in relation to the Steinway & Sons Concert Grand. The program said the show was to be Philip Glass solo on a piano for 90 minutes with no intermissions. Glass modestly explained the reason behind this was to get the audience home earlier. We laughed, but we would have been happy to stay longer.

During the show I often found myself to be physically frozen for long periods of time (10-15 minutes) due to the hypnotic effect of Glass' composition. Glass has the special ability to compress time into singularities.

Glass continued by playing a selection of seven Etudes from a series of sixteen. These Etudes were apparently written by Glass to avoid practicing other pieces. Hear three of the Etudes on Philip Glass' official website under the listen/watch section.

The concert continued with 'Mad Rush' which was written in modules so as to be of "indefinite length", debuting before the Dalai Lama arrived at an event to speak.

After each piece, Glass was received by roaring applause. For his finale, Glass carefully followed a recording of the late Allen Ginsberg reciting a poem reflective of the anti-war sentiment of the 1960s, entitled 'Wichita Vortex Sutra'. The two used to perform it in person when Ginsberg was still alive.

But the crowd did not get enough Glass-- thankfully, Philip returned to the stage for an encore. This was extremely fortunate considering the piece he played, 'Closing' (streaming below) is his most powerful in my opinion. If this doesn't make you feel deep emotion, I honestly don't know what will.

If you would like to visit the Chan Centre for Performing Arts, consider attending Wailin' Jennys & Jeremy Fisher on Saturday, May 8th.